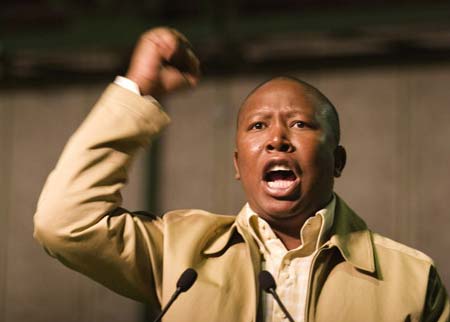 South Africa’s eccentric youth leader and federal lawmaker, Julius Malema, has launched a blistering attack on President Goodluck Jonathan over his handling of the massacre in Baga, Borno State, describing the Nigerian president as “irresponsible” and suggesting South African intervention against the extremist Boko Haram sect.

Mr. Malema, who leads the Economic Freedom Fighters Party, criticised Mr. Jonathan for rushing out public condemnations of the terrorist attack on a newspaper in France when he has remained silent until date on the bloodbath in Baga, a troubled town in his own country.

The youth leader said the South African National Assembly will consider a motion on a possible intervention in the bloody campaign by Boko Haram that has claimed thousands of lives and has worsened in the last weeks.

Boko Haram seized Baga, a fishing community on the northern tip of Borno State by Lake Chad, sacking the military base there and killing soldiers and hundreds of civilians.

Rights group, Amnesty International, said at least 2,000 people were killed in the attack, and said the carnage is the worst attack since Boko Haram began a bloody campaign targeting civilians and government officials in 2009.

On Tuesday, after over a week of silence, the Nigerian military said about 150 people died in the attack, including Boko Haram militants, rejecting the figure provided by Amnesty International.

The call by the military came barely 24 hours after a spokesperson said the casualty figures could not be “credibly determined”.

Mr. Jonathan, who has been on the campaign trail ahead of the February 14 presidential elections, has yet to comment on the attack till date.

But the president was one of the first world leaders to issue a statement condemning the killing of 12 journalists and police officers in Paris, by Al Qaeda-linked terrorists.

While the president has not condemned the Baga attack, his cabinet members too have not commented on the incident.

Yet, like the president, Finance minister, Ngozi Okonjo-Iweala, also tweeted messages of solidarity with the French people, condemning the attack on Charlie Hebdo.

Mr. Malema, who had previously served as the president of African National Congress Youth League, said the action of the Nigerian president had demonstrated “irresponsible leadership”.

“Eh Goodlook, or Goodluck or whatever his name is or badluck I don’t know …He is quick to release statement about the killing in Paris; but don’t (doesn’t) say anything about the killings in his own country. That’s an irresponsible leadership,” Mr. Malema said.

“We are really saddened by what is happening in Nigeria. It is highly disturbing.”

“And we need South African Government to intervene and we will be raising the matter in the Parliament.

“We will make the Parliament to debate it as an urgent matter and pass the resolution for South African intervention in Nigeria,” he said.