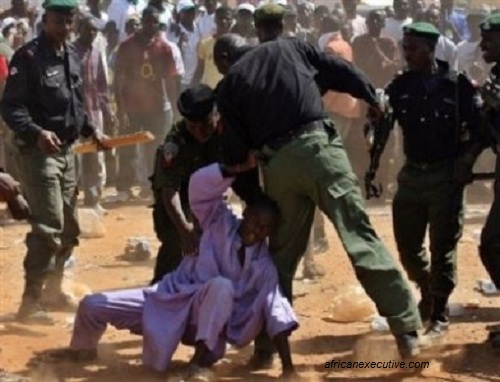 None of the culprit cops has been convicted.

At least nine people have been killed extra-judicially by officers of the Nigerian Police Force in the last three months, a PREMIUM TIMES investigation has shown.

This is separate from the scores of innocent people believed to have been killed by other security operatives, particularly the Joint Task Force, in some Northern States.

The victims were shot in various circumstances between September and November by trigger happy cops.

While the families of the victims mourn the killings of their loved ones by officers paid by the state, the police are yet to convict any of its officials for the crimes.

In many cases, the police say, they are yet to identify the trigger happy cop or are still carrying out investigations on the matter.

The extra-judicial killings have occurred in various parts of the country.

Ugochukwu Ozuah got married on September 15 and was allegedly shot dead five days after his wedding by cops along Gbagada, Lagos, at about 10 p.m.

A sister to the deceased stated that even when the Divisional Police Officer came to the scene of crime, he met the victim battling with his life and didn’t call for paramedics or make plans to take him to the nearest hospital for treatment.

Mr. Oroja was allegedly shot dead by a police corporal, Abbey Adekunle. Threats to burn down the police station of the cop, by irate youths, were averted when the Lagos State Police Commissioner, Umar Manko, announced that the officer had been arrested and will be made to face the law. The cop is yet to be prosecuted.

Two months after Mr. Oroja’s killing, on November 7, a bus conductor was allegedly shot dead by a police officer dressed in mufti. The conductor’s crime, according to witnesses, was that he stepped on the cop.

A day before, a commercial motorcyclist, okada rider, was shot by a police officer at Ilupeju, Lagos, leading to mass protest by Okada riders. Though the victim survived after treatment at the hospital, the guilty officer is yet to be punished and was also injured in the resulting fracas, according to the spokesperson of the Lagos State Police Command, Ngozi Braide.

On September 13, a commercial driver was alleged killed by a police officer in Iperu Remo, Ogun State, for hitting a police patrol van. The culprit is yet to be brought to book.

A 16-year-old boy was allegedly shot dead by a police officer on duty on October 2.

A cop allegedly shot an okada rider, Umar Danmichika, to death in Kaduna on September 26, while the victim was waiting to collect his money from his passenger, witnesses said. The incident happened a few minutes after the okada rider finished eating at his customer’s restaurant.

The owner of the restaurant, Aderonke Taiwo, told PREMIUM TIMES that “He (deceased) is my regular customer, he bought 80 naira food, and he has not paid me when he left to drop the passenger. He is my very good customer and his death is very painful and unfortunate. In fact, God will punish the police man that killed that innocent boy for nothing.”

The Kaduna police said they are yet to identify the guilty cop.

Also on October 13, a shop owner, Elisha Anjorin, was reportedly beaten to death by a police officer on Forcados/Bonny Street in Kaduna metropolis. The victim had tried to intervene in a quarrel between a prison warden and a police officer.

A commercial driver, 35 was allegedly shot by a police officer attached to a new generation bank on November 9 when he wrongly parked in front of the bank to pick a passenger in Uruagu, Anambra State.

A stray bullet from a cop who went to monitor a demolition exercise in Apo area of Abuja on October 16 hit and killed a 20-year-old sales girl, Lucy Ukpong.

Ms. Ukpong, a salesgirl at a photography shop in Apo area, was reportedly hit in the chest while three others reportedly sustained injuries from bullet wounds

In August, a police officer shot at the convoy of the Deputy Governor of Yobe State, Abubakar Aliyu. Mr. Aliyu later said the cop that shot at his convoy, while returning from his farm, was drunk.

Though nobody was killed in the incident, Mr. Aliyu’s statement confirmed the belief by many Nigerians that cops are sometimes drunk while on duty.

It is not only innocent Nigerians who lose their lives and sustain injuries from these extra-judicial acts; even the police have been affected. A cop allegedly opened fire on his colleagues and ended up killing himself in July in Michika, Adamawa State.

Some civil society groups that reacted to the extra-judicial killings called for urgent government action to stop the trend.

The National Coordinator of the Legal Defence and Assistant Project, Chino Obiagwu, told PREMIUM TIMES that that there has been an increase in extra-judicial killings from 2010 to 2012 including those not formally reported in the media.

“The JTF in Borno have killed a good number of people in recent time. And also in the Niger Delta, lots of extra judicial killings are going on there,” he said.

He blamed the rise in the killings to the non-conviction of the culprits.

“This keeps going on because nobody is being punished, we are documenting these killings and once we finish that we’ll do a follow up on them to know what the FG is doing about it.

“We have also asked the Director of Public Prosecution and the commissioners of police to prosecute their men and bring justice to full course,” Mr. Obiagwu said.

The Executive Director of CLEEN Foundation, Innocent Chukwuma, attributed the extra-judicial killings to the conditional option giving to the police to solve crime issues within 48 hours of arrest.

“We at CLEEN foundation are working hard with the police and the Federal Government of Nigeria to stop these killings and prosecute these killers. At least about five hundred police officers are being dismissed every year,” Mr. Chukwuma said.

Only recently, in September, a Lagos court sentenced a former cop, Ikechukwu Nwabueze, to death by hanging for killing a three-year-old baby. The cop committed the crime three years ago, a reflection of the time it takes to convict errant officers.

The police said the killings do not show an increase in extra judicial killings, but a misuse of firearms by police officers.

“There’s no high rise in extra judicial killings but a misuse of firearms by officers, and whenever an officer misuse their arms they are arrested, dismissed and publicly made to face the law,” Force Public Relations Officer, Frank Mba, said.

“Every police officer on the streets who carry firearms are well trained and still undergoes continuous training in the use of arms and if misused are not allowed to go scot free,” he added. Link: http://premiumtimesng.com/news/107356-police-kill-nine-innocent-nigerians-in-three-months.html