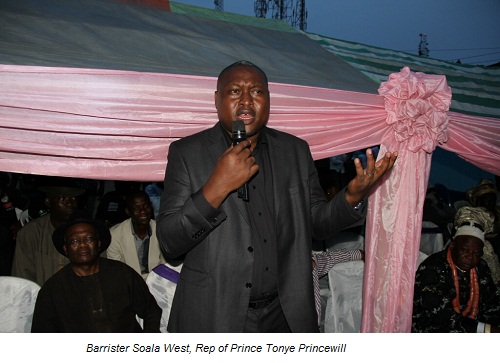 AS IGBOS IN RIVERS AND BAYELSA STATES CONVERGE IN PORT HARCOURT FOR THEIR ANNUAL IGBO DAY, PRINCEWILL URGES THEM NOT TO GIVE UP ON NIGERIA

The 18th of November 2012 in Port Harcourt was a milestone in the history of the unity of the Igbos in Rivers and Bayelsa States as they converged to celebrate their culture, honour some of their distinguished sons and daughters and formally set up both the Council of Chiefs and Patrons in a special Igbo Day celebration which they described as low key as they are still mourning their late leader, Chief Odimegwu Ojukwu (Ikemba Nnewi and the Eze Ndi Igbo gburu-gburu).

What made this special day a bit unique was the appearance of Prince Tonye Princewill a Prince of the Kalabari Kingdom, Prince of Niger Delta Politics, recently the Prince of the less privilaged, the leader of the Princewill Political Associates and a PDP Chieftain as the Special Guest of Honour with numerous of his PPA Leadership in the State that includes over 20 Pastors that attended the event. Through his Legal Consultant, Barr Soalabo West, who represented him at the event, the Prince urged the Igbos not to be deterred by seemingly unfavourable circumstances and shedding of their precious blood in the onerous divine task geared towards building a virile, progressive and prosperous Nigeria.

The Prince who recalled that he was young boy during the civil war in Nigeria but learnt of the millions of the Igbos killed during that unfortunate war and the numbers that are constantly killed in Nigeria on flimsy excuses, pleaded with them not to give up on Nigeria as they have demonstrated they unalloyed love for our nation. If other tribes in Nigeria can emulate the Igbos in their efforts towards nation building the country would have advanced ahead of China and other developing nations in the world.

The Prince who recalled that he was privileged to liaise and collate the position of the Igbos on the plight of the Niger Delta region while a member of the Presidential Technical Committee on the Niger Delta. He acknowledged the support of the Ohanaze Ndi Igbo Leadership and Dr Okwesilli Nwodo in the satisfactory performance of this duty. He then mentioned that His Majesty, Igwe Nnaemeka A. Achebe the Obi of Onitsha, Distinguished Senator Ben Obi, Nze Akachukwu Sullivan, Chief Olisa Metuh, Chief Dubem Onyia, Chief Goddie Ikechi, Chief Chima Ibeneche, Chief Ben Obinali even his Media Chief, Chief Eze Chukwuemeka Eze among others as his mentors and political associates from Igbo land.

He assured the Igbos of his unflinching support in any capacity and pledged to work towards the award of a plot of land to enable them build a befitting place for future hosting of their Igbo Day. The Prince sent the gathering into a frenzied state when he made some donations to the Igbo Community, the Igbo Community wing of the Princewill Political Associates and the National Association of Igbo Students.

In his speech, the Prince also recalled that it was Chief Ben Obinali the former Commissioner of Commerce in Imo State, an Igbo, that taught him the rudiments of business early in life when he started out as an ICT consultant.

The climax of the event occurred when the National Association of Igbo Students honoured the Prince with their prestigious award of the most distinguished friend of the Igbos in Niger Delta and after which the entire community assured the Prince of their total commitment towards his political ideals and his continuous humanitarian efforts in the State and the entire Country.

All the speakers during the event including Chief Engr O.I. Ezenekwe, the President General of the United Igbo Community, Chief (Barr) Obinna Jk Chukwu the Secretary General of the Union amongst others all poured encomiums on the Prince for his outstanding concern for the less privileged and humanity and urged him not to relent as the masses are with him always.

Prof Ndi Eke a Consultant in the Surgery Department of the University of Port Harcourt, His Royal Highness, Eze Adiele Maduagwu Eze Onunekwuru Igbo 111 Rivers and Bayelsa States, Chief Engr O.I. Ezenekwe the President General of the United Igbo Community, Chief Barr Obinna Jk Chukwu Chief Ben Obinali one time Commissioner of Commerce with the Imo State Government who acted as the Chairman of the event were among some of the special Guests that attended the event.