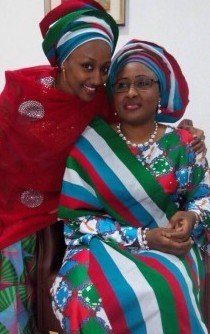 ILORIN — The convoy of the wife of the presidential candidate of the All Progressives Congress, APC, Hajia Aisha Buhari  was yesterday attacked by suspected hoodlums in Ilorin, Kwara State.

State chairman of the party, Alhaji Ishola Balogun Fulani, said this at a press conference last night in Ilorin and fingered a chieftain of the Peoples Democratic Party, PDP.The hoodlums vandalised about 10 vehicles during the attack.

Mrs. Buhari was in the company of the wife of the vice-presidential candidate, Mrs Oludolapo Osinbajo; Kwara State First Lady, Mrs Omolewa Ahmed and wife of the immediate past governor of Kwara State, Mrs Oluwatoyin Saraki among others on the way to a women sensitization programme in Ilorin.

According to Fulani, “a worrisome development took place today( yesterday) during the visit of Hajia Aisha Buhari, the wife of the APC presidential candidate as her convoy was attacked at the Film House along Emir’s Road, Ilorin. About 10 vehicles were vandalized.”

He recalled that APC had repeatedly reported to the police  and other security agencies about the plan by the PDP to cause violence before, during and after the forthcoming general elections.

Contacted, the Commissioner of Police, Mr Salihu Garba confirmed the development assuring that the command  would investigate the incident.