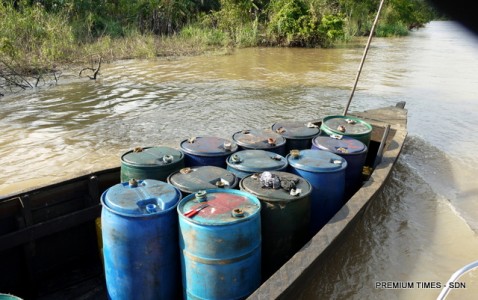 Each time entrepreneurs try to make money from their dedicated talents and backyard, they lose. During the reign of Abacha in Nigeria, the adulterated petrol imported into the Country was worse than those made by Niger Delta gifted talents that are crying out loud for more research and improvement through their “re- discovery”.  We have to give our youths some credits if they try to make something out of themselves, not discourage them with handouts.

This may not be good news for multi-national oil companies and oil marketers. If those youths in Niger Delta succeed in perfecting portable oil refineries, imagine what the impact would be in the world market of petroleum products and fine spirits. If these young entrepreneurs can make petrol out of crude oil, they may be able to eke out fine petrol from the polluted waters which the whole world still struggle with. This is a big market that can compete in the world.

Man has been to the moon but still lacks an efficient way to clean up environmental disaster as a result of oil spills around the globe. If Niger Delta youths can turn crude oil to petrol in their portable refineries, our universities should step up to used polluted area the same way crude   is used. Those portable refineries will not only be useful in the polluted water of the Southsouth but there will be market for such portable refineries all over the world for oil spills disasters.

Would rather suffer through the last petrol shortage? We have a colo-mentality in Africa: if it is Okrika or Ijebu made, it cannot be good or improved. There is more zealousness in destroying counterfeits products that are not up to standard than enthusiasm for nursing products that can be improved by our universities. For ages Africa has developed so many inventions, others have come to study it, improve them in their own countries and cried out EUREKA!

Any government would welcome portable refinery as progress and embrace young men and women striving with their inventions. While Niger Delta has managed to build their portable refineries locally, other countries from Asia to Middle East are building and selling theirs to the highest bidders. The amount of money, time and set-up technicians needed could be produced at home with great saving to our economy and at the same time provide jobs for our youths.

This is by no means an attempt to diminish the damage done to vehicles by improvising young men and women of Niger Delta, it is more a recognition of what should have been done a long time ago. After all, the adulterated petrol of Abacha also damaged some cars and we have since moved on. Even if the petrol from the portable refineries of Niger Delta is as bad for cars as that ogogoro for us, one would think since days of Tai Solarin protest,  ogogoro would be perfect na!

We fight counterfeit products with the same zeal and attitude we inherited from past colonial masters. Their intention was clear since they do not want us to perfect any of our discoveries. They imprisoned us under the guise that our products are dangerous, harmful for human consumption and bad for the economy. Since these are selective reasons because they are right in some cases, it has also discouraged us, even when they are wrong.

Again the case of ogogoro and bush meat consumption bear out their point when they are right but after all these centuries we cannot say Africans cannot practice what is good for them and ban what is not in their interest. The problem is instead of focusing on making out the right from wrong, we use a sledge hammer to kill and ban everything. This is the case of throwing out the baby with the bath water.

God has blessed this Continent of Africa so much with natural resources, strong and intelligent people and SUN all year round. Unfortunately, we have many friends outside our Continent that have helped us turn each blessing into a curse. It started with Gold Coast, Ivory Coast, Diamond Coast, Uranium Coast, Agriculture Coast all year round. Yet we can neither feed ourselves nor make money out of Cocoa Coast, nor use uranium to defend Africa shrewdly!

The latest curse is that of petroleum. As soon as Nature realized it is going to be the main source of energy, some countries were blessed abundantly with it in Africa with the hope that they will lift up their brothers and sisters in the Continent. If God is Nature or Nature is God, he may never forgive Nigeria. There is no need to repeat the oil curse here, but what has made other countries rich has become a liability for Nigeria.

We produce so much oil, we do not have the capacity in all of our plants to refine enough for local use. We built refineries but they have never worked at full capacity and if they do, they have never worked long enough to satisfy local needs. There are stories importers of generators intentionally sabotage our efforts to produce electricity and petrol. We begged and asked for more plants but if we cannot maintain the ones we already have, how can we maintain more?

Somehow, other African countries have not learned. One would think that Ghana would learn from Nigeria’s missteps and curses from oil. No, they are falling into the same mistakes of euphoria and individual corruption. President of Equatorial Guinea Obiang’s son Teodorin, as a government minister spent lavishly all over the world and was forced to forfeit more than 30 million dollars of assets in the United States, from the poor people’s resources in October 2014.