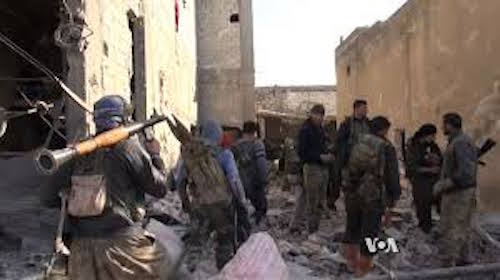 Common wisdom has it that ultimately failed or troubled popular revolts in 2011 in the Middle East and North Africa have sparked bloody civil wars and violent extremism, and given autocracy a new lease on life.

Indeed, there is no denying that a brutal civil war in Syria has killed hundreds of thousands and dislocated millions. Iraq, like Syria, is seeking to defeat the Islamic State (IS), the most vicious jihadist movement in recent history. Sectarianism and religious supremacism is ripping apart the fabric of societies in the Middle East, North Africa, and beyond.

Yet, the legacy of the 2011 revolts is not simply massive violence, brutal jihadism, and choking repression. In fact, the revolts kicked off an era of change, one that is ugly, destabilizing, violent and unpredictable, and that may not lead any time soon to more liberal, let alone democratic rule.

It is an era that is buffeted by autocrats’ need to push diversification of their economies and economic reform that involves a radical rewriting of social contracts. It also involves the need to upgrade autocracy to ensure sustainable economic change. That means making repressive rule more palatable by broadening the margins of acceptable social life and behaviour and creating channels for expressions of discontent and frustration.

Change by hook or by crook

Jihadist groups like IS have risen on the back of policies that have excluded or marginalized societal groups, counterrevolutions that have helped reverse advances made in 2011 without producing credible alternatives, mismanagement of expectations in the immediate wake of the popular revolts, and repression of whatever channels existed to express even modest or limited criticism.

IS, like it or not, constitutes a revolutionary force in the sense that it seeks radical and fundamental social, political and economic change. It may not be the kind of change many would want to embrace, but its philosophy thrives in an environment in which alternatives have little opportunity to blossom.

Saudi Arabia, for all its warts, including ideological roots that it shares with jihadism, is like others in the region experimenting with controlled, albeit risky social and economic change. Granted, the purpose of the exercise is to ensure the survival of the ruling Al Saud family. Nonetheless, social change such as greater entertainment opportunities in a culturally austere kingdom, less religious policing, and more opportunities for women, is tangible.

The problem, however, is as detailed in the 2016 Arab Human Development Report (AHDR), that social, economic and political reform is likely to succeed only if freedom to express grievances is guaranteed.

Warning that in the absence of freedoms “some Arabs would eventually resort to violence, with dire consequences,” the report noted that “the events of 2011 and their ramifications are the outcome of public policies over many decades that gradually led to the exclusion of large sectors of the population from economic, political and social life, depriving many people of appropriate health care, good educations and suitable livelihoods.”

A recipe for disaster

Little has changed in much of the Middle East and North Africa. The youth bulge is bulging with youth accounting for one third of the Arab world’s population. Employment prospects are limited and likely to deteriorate in the coming years.

“In the Arab region, the policies and laws that regulate the labour market hinder the growth of jobs in a manner that matches demographic growth and the needs of market. This affects youth in particular and prevents the economic empowerment of youth. The prevalence of nepotism and reliance on social connections play a large role in the distribution of the limited available jobs, prompting young people who are looking for jobs to depend on social relationships and family ties,” the report said.

Opportunities for political engagement are even more restricted. In short, issues that drove the 2011 revolts are six years later even more prevalent. Counter-revolutions have rolled back whatever openings were created by the uprisings and engineered situations in which civil war, brutality and political violence set the tone. It amounts to a recipe for disaster in an environment in which state-encouraged sectarianism, supremacist religious ideology, violence and repression create an explosive mix.

The writing is on the wall. The failure of governments to deliver leads many to increasingly stress religious, sectarian or tribal rather than national identities. Many young people have a sense of having been marginalized. The result is a hardening of battle lines. Fifteen years ago, five Arab countries were mired in conflict, today the number is eleven and increasing.

On the surface of things, the counterrevolution, the war in Syria, and the hard-handed policies of secret police and law enforcement have stifled appetite for protest in many Arab countries. Yet, much like in the walk-up to 2011, discontent is simmering. That does not mean that it by definition will erupt. It may not or perhaps more likely be sparked by an unpredictable black swan.

The AHDR charts a five-year cycle in the life of protest movements in the Arab world. Each cycle proves to be more volatile than its predecessor. IS is one expression of that. Youth “may prefer more direct, more violent means, especially if they are convinced that existing mechanisms for participation and accountability are useless,” the report warns.

At the bottom line, the counterrevolution coupled with autocratic attempts to ensure a continuation of the fundamental status quo with upgrades and limited reforms harbours the seeds of a next cycle of a push for change.

A survey by the United Nation’s Economic and Social Commission for Western Asia (ESCWA) put the cost of armed conflict in the Arab world at $613.8 billion in lost economic activity and a $243.1 billion in fiscal deficits.

Decades of economic cronyism, lower productivity, reduced investment with the exception of the energy and real estate sectors, the choking of channels to express discontent, and greater emphasis on the repressive arms of the state at the expense of strengthening institutions make autocratic upgrades less likely to succeed and heighten the role of violence in efforts to force change.

Violence does not connote the end of what many believe to have been a short-lived effort to achieve change. It also does not mark an end to a short-lived Arab era of defiance and dissent. Instead, it serves as an indicator of how far Arab regimes are willing to go to ensure their survival and raises the cost of inevitable change.

The Arab world is since 2011 in transition, albeit one that is likely to continue to be bloody and brutal. It may well be a transition in cycles, some of which may be regressive rather than progressive on Lenin’s principle of two step forwards, one step backwards. What is nevertheless clear is that the status quo ante is history and change is the name of the game.

This story first ran on Mobilizing Ideas, a blog of the The Center for the Study of Social Movements at the University of Notre Dame

Dr. James M. Dorsey is a senior fellow at the S. Rajaratnam School of International Studies, co-director of the University of Würzburg’s Institute for Fan Culture, and the author of The Turbulent World of Middle East Soccer blog, a book with the same title, Comparative Political Transitions between Southeast Asia and the Middle East and North Africa, co-authored with Dr. Teresita Cruz-Del Rosario and two forthcoming books, Shifting Sands, Essays on Sports and Politics in the Middle East and North Africa as well as Creating Frankenstein: The Saudi Export of Ultra-conservatism.