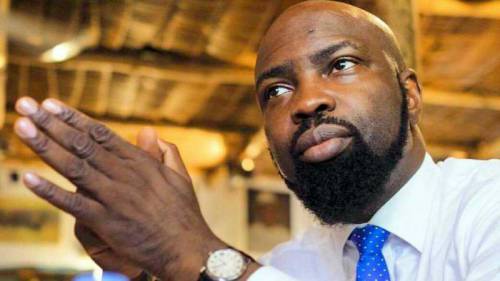 Chocolate City musical entrepreneur Audu Makori has been arrested by men of the Nigerian police over a series of a tweet he sent to his followers last month alleging that five students of the Kaduna State College of Education had been killed by Fulani Herdsmen in Southern Kaduna crisis.

Saharareporters learnt that Mr. Makori was arrested around midday in Lagos on Friday after he arrived at the police station on the invitation of a police and shown and arrest warrant. He was then arrested and flown to Abuja where he was detained awaiting possible charges for “incitement”.

Mr. Makori has already apologized to the Governor of Kaduna state, Nasir ElRufai over the tweet and gone a step further by handing over his driver who was the source of the false information to the police.

The story was also filed by Mr. Luka Biniyat, the Kaduna State correspondent of Vanguard Newspapers, but was found to be untrue.

Maikori’s apology was contained in a statement issued in Lagos.
In the statement, the music entrepreneur said the statements issued by the College of Education, Gidan-Waya, and the Kaduna State government refuting the story that five students of the institution were killed by Fulani herdsmen 27 January compelled him to investigate the story to ensure that all the facts of the case and evidence were presented to the authorities. Makori stated that he was fed wrong information by his former driver, who is currently in police detention assisting with the investigations.

“My driver Simon Joseph had travelled to the village to attend his younger brother’s burial and on his return on Monday, the 30th of January 2017, I asked him for pictures from the burial, the ID card of his brother and also pictures of the casket so I could submit to the authorities and he told me that he had phone issues so he could not store pictures on his phone. He told me, however, that his sister had the pictures on her phone and I proceeded to give him money to go to Ikeja to get the pictures from his sister, so I could present these to clear my name. He didn’t return till evening, and when he did, it was without the said pictures.

At this point, I began to strongly suspect foul play. I again questioned him about the veracity of his story to which he swore on the bible that his brother was dead and even began to shed tears,” said Mr.Makori.

On February  2, added the Chocolate  City boss, he took the driver and his relative to Lekki Police Station in Lagos for questioning. This, he said, was done because the driver supplied no concrete evidence of the death of his brother and those of fellow students. “When we got to the station, he maintained his story about the deaths being real and how he was being blackmailed until the police officers at the station explained to him that he could be arrested. He then confessed and said he was just trying to collect money from me; that he knew that I was involved in the advocacy on the Southern Kaduna crisis and he wanted to ride on that to obtain money from me under the pretext of burial,” Mr.Makori stated.

After realizing he had been misled, Mr. Makori said he believed the appropriate thing to do was to issue a statement retracting the tweet, which reported the murder of the students.       “I naively assumed that no one in his right mind would lie about the death of a human being, especially if that person was/is his younger brother.

Consequently, I hereby tender an unreserved and sincere apology to the management of College of Education, Gidan Waya, the Governor of Kaduna State,  the Kaduna State government, and also to the people of Southern Kaduna and the Fulani community for the false statement by my driver which I also publicized believing same to be true.

“I make this statement with all sense of responsibility realizing that by openly admitting what transpired, people may begin to doubt my credibility and that of my statements in future… this is a risk I am willing to take, but I would rather tell the truth about the situation that suppresses it,” Mr. Makori added contritely.

He added the apology is hugely significant because he is a leader in his community he is one of those that younger people look up to.
He also pleaded with the warring parties in the state to sheathe their swords, saying the unfortunate situation is now being used by politicians, religious leaders, and opportunists for their personal agendas.

However, Makori said his apology is strictly limited to the alleged incident at the Collge of Education.  He added that he was glad when, on 2 February, he read the report of the arrest of 17 suspects, connected with the Southern Kaduna killings, with arms and ammunition. He commended the security agencies and government for the arrests.