You certainly read the title of this piece correctly. Does President Buhari really love Nigeria? If you ask me, I’ll share my sincere thoughts. I frankly and patriotically don’t think so. And before you start asking why I would believe this of our country’s President and Commander-in-Chief of the Armed Forces of the Federal Republic, I’ll tell you many reasons why our number one citizen, through his many appointments since coming to power, has demonstrated that his love for the unity and peace of Nigeria is clearly debatable if not completely doubtable.

Or how can the President carry on as if he loves the country yet continues to disregard the genuine concerns and fears of both citizens and leaders alike who, for more than a year since he came to power, have been complaining that he is favouring a particular section of the country in his appointments? And instead of him to listen to these genuine concerns and make necessary amendments in the interest of the country, he is only worsening the situation.

As a journalist, I am trained to look for facts and present these and these alone to readers. And the facts of President Buhari’s appointments so far is that he has favoured a particular section of the country to the detriment of others!

Now, a news report, “Southern groups knock Buhari’s pro-North security appointments,” published by Saturday Punch over the weekend, is particularly revealing. The paper’s findings show that 14 of the nation’s 17 security agencies are currently being headed by Northerners. The majority of them were appointed by President Buhari. Only three security agencies are headed by Southerners. Now, what is the meaning of that in a country like ours? 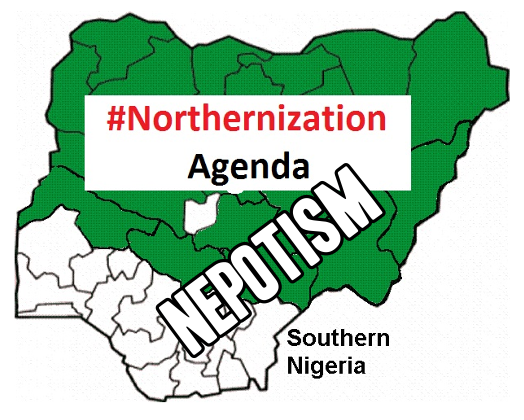 Meanwhile, it is necessary to understand the position of the Constitution on this matter as clearly stated in Section 14 (3) of the 1999 Constitution of Nigeria, as amended.  “The composition of the Government of the Federation or any of its agencies and the conduct of its affairs shall be carried out in such a manner as to effect the federal character of Nigeria and the need to promote national unity, and also command national loyalty, thereby ensuring that there shall be no predominance of persons from a few states or from a few ethnic or other sectional groups in that Government or in any of its agencies.”

Sadly, it is this constitutional provision that President Buhari has been flagrantly disobeying despite swearing before the world on May 29, 2015, to protect the Nigerian Constitution.

The fact, and indeed, the truth is that the pattern of President Buhari’s appointments has not reflected federal character and the diversity of the country. This is terrible for national cohesion and unity. And where there is no unity and faith, there cannot be peace and progress. That is why the nature of the President’s appointments so far is not just worrisome to true patriots and sincere lovers of Nigeria but also dangerous to the corporate existence of our country.

Honestly, it is troubling and that is why I’m really forced to ask today if the President really loves Nigeria genuinely deep down in his heart beyond mere profession of such in his speeches.

Even though Presidential spokesman, Mr. Femi Adesina, continues to emphasise that the appointments by his principal were made on merit, is the Presidency now saying only Northerners have merit?

I remember that early in the life of this administration, this same issue had come up. In fact, at the time, the Presidency, while reacting to similar allegations of lopsidedness in Buhari’s appointments, had assured agitated and concerned Nigerians that the President would balance his federal appointments.

Back then, Adesina, while reacting to the criticism that came after Buhari made six appointments, with five of them from the North, had promised that the President would respect federal character as stipulated by the constitution.

“Nobody can fault the fact that the persons appointed were appointed on merits. In terms of the spread, the President has prerogative to appoint and he knows there is federal character. I am sure that there will be balance in the future. These are still early days. At the end of the day, we will have a balance. By the time more appointments are made, it will balance out,” Adesina had said.

Sadly, one year after, there hasn’t been a balance in Buhari’s federal appointments despite the assurances from the Presidency.  The matter has only gotten worse. Aside 14 of the nation’s 17 security agencies currently being headed by Northerners with the majority of them appointed by the President, of Nigeria’s 36 ministers today, 24 were chosen from the North.

And with the latest appointment of another Northerner, Maikanti Kacalla Baru, as the new managing director of the Nigerian National Petroleum Corporation (NNPC) by President Buhari, it really would be interesting to hear what other excuse or defence Mr. Adesina would now come up with for his boss. While Baru may be a good man and eminently qualified for the position, he has been long in the NNPC system and may not be able to offer a new mindset and thinking for the corporation. What new offering will he bring to the table?

Moreover, before Kachikwu came on board, all the past six GMDs of NNPC (Yar’Adua (Katsina State -NW), Barkindo (Adamawa State – NE), Ladan (Kaduna State – NW), Oniwon (Kogi State – NC), Yakubu (Kaduna State – NW), Dawha (Borno State -NE), came from the North. It would have been better if the President found a suitable and qualified Southerner for the position instead of another Northerner from Bauchi state.

Again, although some Nigerians may not be bothered about the origins of those appointed to serve in government provided they are qualified, perform well and deliver good governance, the other side of the coin is that this doesn’t promote inclusiveness but rather pushes up agitations against the system. Every zone and state in the country has capable hands, men and women who can hold their own anywhere and perform distinctively if appointed to serve. This is a reason why Nigeria’s founding fathers, enshrined federal character in the document of independence during the 1958-59 conference in London.

When the media was reporting that Dr. Ogbonnaya Onu would likely be appointed as the Secretary to the Federal Government, as part of the administration’s strategy to woo the Igbos who voted for his opponent, the President decided to pick Babachir David Lawal from Adamawa State. The President’s Chief of Staff is also from the North.

Many who vehemently opposed Buhari’s emergence as President and described him as a tribal and religious champion now feel they have been justified and vindicated.  Even most of those he appointed from the North were Muslims, a situation which the Northern chapter of the Christian Association of Nigeria (CAN) has also come out to condemn. Even some of his ardent supporters are losing faith and confidence in his government and really embarrassed at the turn of things. Buhari’s insinuation months ago that those who didn’t vote for him shouldn’t expect as much from him compared to those who massively gave him their votes during an interview he granted during one of his trips abroad, only dented his image. It was an error. It was a statement unbecoming of a leader let alone a President of a whole country.

That is why some truths must be told and clearly understood. President Buhari ought to be uniting the country rather than making statements or appointments that could further polarize the country. Even if some of these appointments were on merit, it is not all there is to it. Were it not so, I believe the President would have given some serious thoughts to the ethnic backgrounds of the people he appoints aside their qualifications and integrity. He can’t continue to carry on as if all he is doing is right and very well in order because they are not.

A good father who sincerely loves his family would not favour one child above the others or even show in his conduct that a particular one among his children is his favourite while he gives no damn about the others. Yet this is what President Buhari continues to do. For our country, it is unhelpful. It is worrisome. And it is dangerous.

While former President Jonathan had his own issues while in government, and they were many, yet he appointed Northerners as his National Security Adviser, his Defence Minister, his Inspector-General of Police and Chief of Defence Staff.

Beyond making defences that are no defences, the Presidency must know that majority of Nigerians are not happy at the choices the President is making. His appointments are not promoting inclusiveness. And he needs to correct this otherwise Nigerians will give up all hope on him.

Like I mentioned earlier, every section of the country has capable hands, men and women who can hold their own anywhere and perform distinctively if appointed to serve. It is imperative for the President to carry everyone along in the spirit of nation-building, as a statesman, and as a father to all.

And one of the simple ways for President Buhari to show to those who doubt his sincere love for the country is to redress this anomaly. Another is to henceforth ensure that no section of the country is favoured above others. Anything less, he will be doing himself in. And for his Presidency, historians will pass their honest verdict at the fullness of time. Because, for all actions, he must remember there are reactions and consequences!