China’s government is waging a corruption crackdown that resulted in the punishment of 146,517 people last year, the official Xinhua News Agency reported in June.
~ http://www.bloomberg.com/news/articles/2011-07-23/china-executes-14-billionaires-in-8-years-culture-news-reports

The latest Chinese billionaire to be executed was Chinese billionaire businessman, Liu Han after being found guilty of murder and running a mafia-style criminal gang. Liu was the chairman of the Hanlong Group – the biggest private company in Sichuan Province.
~ http://www.bbc.com/news/world-asia-china-31310325 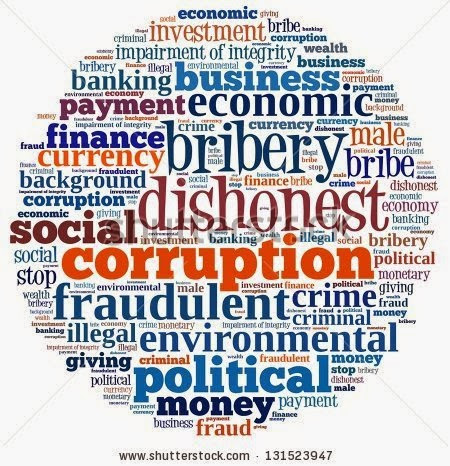 Politicians like President Goodluck Jonathan of Nigeria would have been found guilty of the criminal charge of aiding and abetting corrupt practices since he was the Deputy Governor to the ex-convict Mr. Diepreye Solomon Peter Alamieyeseigha (“DSP”

Diepreye Alamieyeseigha was detained in London on charges of money laundering in September 2005. At the time of his arrest, Metropolitan police found about £1m in cash in his London home. Later they found a total of £1.8m ($3.2m) in cash and bank accounts. He has been found to own real estate in London worth an alleged £10 million.[citation needed] His state’s monthly federal allocation for the last six years has been in the order of £32 million.[citation needed] He jumped bail in December 2005 from the United Kingdom by allegedly disguising himself as a woman, though Alamieyeseigha denies this claim.

On July 26, 2007, Alamieyeseigha pled guilty before a Nigerian court to six charges and was sentenced to two years in prison on each charge; however, because the sentences were set to run concurrently and the time was counted from the point of his arrest nearly two years before the sentences, his actual sentence was relatively short. Many of his assets were ordered to be forfeited to the Bayelsa state government. According to Alamieyeseigha, he only pled guilty due to his age and would have fought the charges had he been younger.
On July 27, just hours after being taken to prison, he was released due to time already served.
http://en.wikipedia.org/wiki/Diepreye_Alamieyeseigha

A criminal charge of aiding and abetting or accessory can usually be brought against anyone who helps in the commission of a crime, though legal distinctions vary by state. A person charged with aiding and abetting or accessory is usually not present when the crime itself is committed, but he or she has knowledge of the crime before or after the fact, and may assist in its commission through advice, actions, or financial support. Depending on the degree of involvement, the offender’s participation in the crime may rise to the level of conspiracy.

For example, Andy draws a floor plan of a bank, knowing of Dan’s intention to rob it. After Dan commits the robbery, Alice agrees to let him store the stolen money at her house. Both Andy and Alice can be charged with aiding and abetting, or acting as accessories to the robbery.
– See more at: http://criminal.findlaw.com/criminal-charges/aiding-and-abetting-accessory.html#sthash.hAa7euCX.dpuf

The corrupt practices in the administration of President Goodluck Jonathan are more than enough to hang such a politician in China.
And his accomplices and partners in crime in the Ministry of Petroleum Resources, Ministry of Aviation and others would also be indicted and convicted with him.

The easiest way to investigate and verify corrupt practices in both the government and private sector is simple.
Even the office messenger carrying the files has enough information and if they like, they can go and destroy the files, but the facts can still be found with the investigative methods used in China.

The oil blocks and fuel subsidy billionaires in Nigeria will not escape from being arraigned and prosecuted for corruption, because of the sharp practices in the procurement of their licenses. And all the beneficiaries of the inflated government contracts.
Overinvoicing is difficult to track, but common in many white collar crimes.
See the following cases:

White Collar Crime – Nigeria
Nigeria – contributed by Sofunde Osakwe Ogundipe & Belgore
Fraud and bribery cases back in the news
Recent months have seen fraud and bribery return to the headlines. Reports emerged of alleged corrupt payments in a case involving a former oil minister; the High Court cast doubt on the ability of a Nigerian bank to enforce an English fraud judgment obtained against a former bank chief executive; and a former House of Representatives committee chairman on trial for extorting a bribe succeeded in further delaying his trial.
Author: Babajide Oladipo Ogundipe

Nigeria – contributed by Sofunde Osakwe Ogundipe & Belgore
Case law update
A former speaker of Nigeria’s House of Representatives, Dimeji Bankole, was recently acquitted of charges of improperly awarding contracts and embezzling funds while in office. When criminal cases end in this fashion, it is usually because the case was either poorly investigated, poorly presented to the court, or both.
Author: Babajide Oladipo Ogundipe

Nigeria – contributed by Sofunde Osakwe Ogundipe & Belgore
Supreme Court reverses conviction of high-profile politician
The Supreme Court recently reversed a decision affirming the conviction of a high-profile political appointee for improprieties while in office. The decision has been condemned as “perplexing”, likely to “encourage corruption in the country” and “the latest in a long line of judicially orchestrated set-backs for the fight against corruption in Nigeria”.
Author: Babajide Oladipo Ogundipe

PS: The author of this topic is a nominating member of the International Law Office and Global Financial Integrity and the only Nigerian blogger and journalist with an online library.