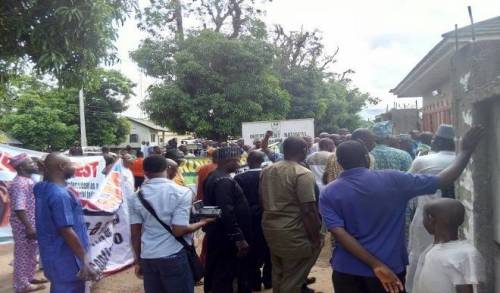 We the combined peoples of Kogi West Senatorial Zone of Kogi State are here today to initiate the process of recall for Senator Dino Melaye. We are here to pick the forms to commence the process from INEC.

Let is be known that all of the Local Government Areas comprising Kogi West Senatorial Zone are united in their resolve to recall Senator Dino Melaye and remove the disgrace he has become to all us.

We represent the following LGAs:

We have compiled the key reasons below to show the world that Senator Dino Melaye’s recall is not only long overdue, but the right thing to do in the best interests of Kogi West Senatorial Zone, Kogi State, Nigeria, and in fact the institution and dignity of the distinguished Senate of the Federal Republic Republic.

He has not deemed it fit to have a Constituency Office in Kogi West Senatorial Zone even after 2 years in the Senate, meaning he has no presence in the Zone and we have no way of reaching our Senator.

He has no projects initiated in the constituency after 2 years in the Senate.

He is known for a continuous flow of irresponsible utterances which embarrass the constituency. For example: ‘I will beat…impregnate you’ referring to a fellow Senator and the wife of the National Leader of the APC, Asiwaju Ahmed Tinubu.

Violence, thuggery and other Electoral Offences against our people during elections.

He not only insulted Senator Bola Ahmed Tinubu, but he travelled all the way from Abuja to the leader’s home in Lagos looking for a fight.

He insulted the Sultan of Sokoto,calling him an Islamist with a Muslim agenda in Kogi State, simply because His Eminence visited to celebrate the 1st Anniversary of the Government of His Excellency, Governor Yahaya Bello.

He routinely insults other leaders, elders and personalities.

He persists in portraying our Senatorial Zone as hostile to the Administrations of His Excellency, President Muhammadu Buhari and His Excellency, Governor of Yahaya Bello of Kogi State respectively, for no just cause and not minding the impact on us.

He is notorious for conduct unbecoming of a Senator in the way and manner he relates to the Senate President as if he were a bodyguard or houseboy instead of a full Senator representing a proud constituency like us.

He is enmeshed in a pending certificate scandal – we now believe he lied to us about his academic qualifications, part of the basis of which he sold his candidature.

He has brought home no dividends of democracy to our Senatorial District.

He paints our dear Kogi State bad in the Press at every opportunity he gets for his own selfish political interests, many times without even a clear understanding of what he is talking about.

His source of wealth is questionable to us and certainly not the model we wish our youth to emulate.

He is indecent and deliberately corrupts public morals, for example, he routinely gives youths in the constituency who approach him for help N1000.00 or less, telling them to use it to buy condoms.

He is notoriously corrupt and has been caught on video scheming steal the resources of Kogi State among himself and a few cronies calling us elephants to be killed and shared.

He is an electoral fraud and has been caught on audio offering a Judicial Officer money to decide an electoral matter in his favour.

He has no respect for Party democracy, and routinely flouts lawful decisions and directives of even his own party leadership.

Dino Melaye has breached multiple codes of conduct by his deliberate acts and omissions and it is time the authorities acted to enforce the laws and the Constitution.

Whether the appropriate authorities act or not, we the people of his constituency who are at the receiving end of his shameful deeds have run out of patience and are resolved to recall and replace him with a decent and people-oriented Senator.

We understand the requirements of S69 of the Constitution of the Federal Republic of Nigeria, 1999 regarding the recall of such a member of the National Assembly and hereby assure everyone that Kogi Central Senatorial Zone is united in this and will achieve it.

We hereby give the Kogi State Government notice that we are going through with this and if they will not help us, they must also not try to stop us or put obstacles in our way, in particular, everything the Law requires to be done by the Administration in Lokoja in aid of this process must be done with despatch.