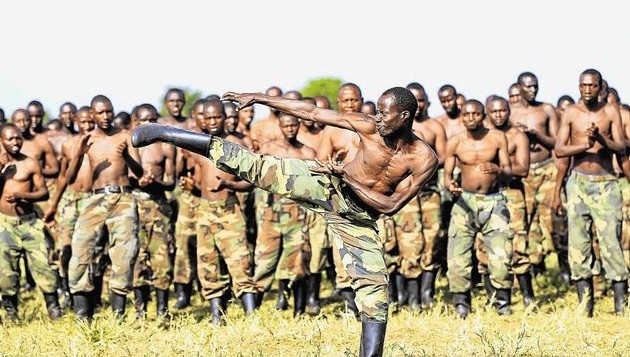 In my interview with the BBC’s Nkem Ifejika yesterday, I was asked a very important question: “You know the president may not likely approve,” the astute Nkem poised.

After a sigh, I responded: “I am highly optimistic, I believe the president will act responsibly,” – in the best interest of the security of the nation.

Indeed this is our hope and expectation, myself, the Civilian-JTF and the thousands of anticipating volunteers around Nigeria, for me, that was till I noticed what appears to be a “chess-type” politics-as-usual move by the government, who appear to be playing chess with our lives in Nigeria!

The Punch today carries a story in which the Nigerian military allegedly announced “mass recruitment.” The story had this uninvited information of this decision being backdated to March (before our clamor) and to be begun in May (giving enough time after now).

While not herewith querying the truth in the presentation, Nigerians are worried that this is a diversion tactic to delay and attempt to avoid the calls around the nation for an urgent executive authorization for the right of patriotic youth to bear arms and engage and defeat the terrorists.

Nigerian patriots and well meaning, God-loving citizens have been mobilizing and purchasing equipment in preparedness for a massive mission against Boko Haram. Many have begun moving towards Borno to join the Civilian-jTF in a national civilian mission to eliminate terror, once and for all.

Unlike ex-militants who are now supported and chattered by the administration to handle the nations security; despite our being killed daily, and our old, weak and vulnerable, and our children being exposed and at the mercy of Boko Haram terrorists—as happened in Chibok and Bama where the state security did not respond for a full 8 hours or carnage—we will not bear lethal arms, UNLESS there is explicit approval by the Federal Government of Nigeria. We do not want to be killed by intentional military strikes and our dead bodies to be touted as “successful military campaign” strikes against the sought after terrorists. We know how things work in Nigeria, hence we will work with the government and, we will only begin to arm ourselves with the tools we know will turn this war around, when we have received Jonathan’s approval.

Nigeria Needs A Civilian Army For The Troubled Northeast: Time For The Mike-Tyson Gloves

The sooner the president gives approval of this army, the better for Nigeria. Nigerians are waiting on the president to act wisely and act in the best interest of national security. The valiant civilian-JTF have been making this call for the right to bear arms to pursue the terrorists in every hole they are hiding, where our military is unable to explore for lack of equipment, will or knowledge of the terrain. The Civilian-JTF have been ready to provide integrated security to the border communities, armed and ready to respond to their alerts of impending terror, which the military has been unable to do for four years of free, wanton carnage by Boko Haram.

Our government has left these 20,000-40,000 ready civilian-JTF army, wasting and in harms way, tackling Boko Haram and dying, with only knives and sticks to defend themselves. The civilian-JTF pursued the abductors of our 234 girls to the borders of Cameroon. The army did not.

The Civilian-JTF accompanied the parents of the missing girls deep into the jungles, when the army was not there. The army is doing its best, but it has limited capacity and is bogged down with operations in the middle belt and creeks of the south. SaharaReporters today reports that soldiers at the war front are tired and want quicker rotations. This is the reality. The government shelving this responsibility by itself with this proposed recruitment will barely graze the problem, knowing as Nigerians, how things always go. Nigeria has been in this state of dire and worsening terror for four years, suddenly when civilians clamor for a civilian army then phony mass recruitment is brought up. This is not the solution. This is the way of Nigeria under the present administration. Likewise it was until an intelligence group I participated in, made a call for a state of emergency, that one was declared last year May. Till our call made on May 8, the government used baby-gloves for the terrorists, now they use kid-gloves. We are ready to bring in the Tyson gloves!

There are millions of able Nigerians for volunteer service and an army of 50,000 youth is ready upon permission. Can this be regarded as Privatization of the army? Well, not really, in fact, not at all; but the term helps us to relate. In this case, the private army is not a business but a mere voluntary effort from patriotic, self sacrificial youth from all over the country, giving them a unique NYSC-like opportunity for true service to their people and nation. NYSC and its first month is extracted from a global system in which youth become reserves, available for conscription. This is what Nigeria’s youth learned in the first month of NYSC camp. This is why we went through the drills. Now we are ready for army monitored combat training, and quick deployment to comb and secure the borders and forests, with our will, skill and sophisticated equipment from our funds and local and international donors.

The Nigerian government today believes they cannot manage any public infrastructure: Power, refineries, etc. Likewise, they must admit they cannot properly manage the security department and a military response to terror, which is no different than other public parastatals and assets.  This request, not for privatization of the army, but private/civilian participation in armed defense goes in line with current government standard procedure.

We are not asking to take over a public infrastructure or to punish the masses by banning Tokunbo (used car) importation so our cabal and government share-holders and the banks can force the exploitation of the masses through car assembly plants and high interest, bonding bank loans.

What Nigerians are asking is for the approval of our right to defend ourselves in a situation of national emergency. Nigerians of all works and creeds are on standby. Muslims from Muslims Against Terror organization, 100 Niger delta youth under the patriotic leadership of Prince Kpokpogri whose group has contacted their local Delta legislators for approval and support, are on standby. Thousands of youth across all geographical lines have declared that enough is enough and committed to sacrificing their lives to free Nigerians from these terrorist ruffians. The local and international pledges to participate and support this mission are unseen. It is phenomenal!

We are not requesting money, oligopoly or any piece of the national ‘cake’ or assets; all we seek is permission to purchase our tools and sacrifice our lives to rescue Nigeria.

This is a true chance for Nigeria. An opportunity to exhibit the true capacity of its people. A chance for unity in an admirable cause for humanity. This approach, with full civilian involvement, will eliminate distrust and the deadly political grid-lock on terror as well as the resulting societal suspicion and ethnic fractionation.

Boko Haram is a sophisticated terrorist network with tentacles. They are determined, desperate and dangerous. This threat is more complex than the Nigerian security department with is political challenges, and constraints and Abuja as is can quell. It has been four years of worsening terror. Nigeria needs a new and intelligent, sophisticated approach that involves a superior force of numerous civilian soldiers, equipped with sophisticated gadgets, to defeat Boko Haram. We need the collective energy and brains of the people. We need a civilian army to combat this terror.

Today there is an example of this in Nigeria. Tompolo, an ex-militant has been financed with millions of dollars by the Goodluck Jonathan administration to “provide armed security” for the Niger Delta oil installations. We are calling on similar authorization for the true patriots from around Nigeria, who have been tested and trusted, fighting and dying for Nigeria and are good guys and not ex-agitators like Tompolo, employed by Nigeria. The north and Nigeria as a whole needs our help immediately.

Civilian forces, like US’ Blackwater, are known to support the US army and even have more men available than the army. These forces go the extra mile that the conventional army does not. The request of Nigeria’s youth and the Civilian-JTF is similar, but this is for a temporary force and not a company/organization.

A few thousand deranged Boko Haram terrorists and their sponsors no matter who and how many they are, cannot continue to hold down a nation of 168 million, with 80 million able and willing youth and the love and support of the entire nation and its friends abroad.

It is time to harness collective good to wipe-out fringe evil. This is the best and most practical solution to Boko Haram terror, as also suggested by the ex-president of Ghana, Jerry Rawlings, who recommended civilian involvement in abating the terror crises plaguing the nation.

The nation awaits the president’s approval.