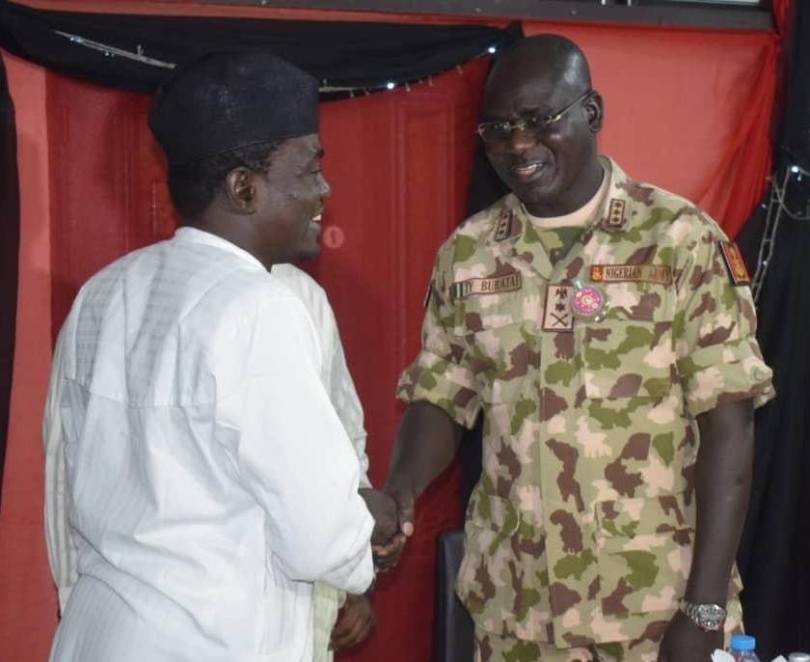 My namesake, I commend your relentless counterinsurgency media campaigns against our enemies, on a pro bono basis without a penny from the military. Please sustain the tempo.” – General Yushau Abubakar

General Buratai, the above message was sent to me by the first Commander of Operation Lafiya Dole, Major General Yushau Mahmood Abubakar, when he was redeployed to the Nigerian Army Headquarters as Chief of Training and Operation in January 2016. He later died in a very mysterious accident along Damaturu-Maiduguri Road two months later in March 2016. It is one of several goodwill messages we receive from top military officers and soldiers on our media interventions. I must also appreciate your goodwill message too when I voluntarily retired from the public service last year.

As you are aware, this is not the first open letter to you or article that I have written about you and the Nigerian Army under your watch (https://cutt.ly/burataimemo). I am writing presently to draw your attention to the highly libellous and defamatory rejoinder written about me by one Terrence Kuanum, who is allegedly working as a contractor/activist for and supported by the Nigerian Army.

In his over 3000 words-long defamatory piece, reveling in insidiously false claims, Mr. Terrence labeled me a Boko Haram supporter, ISWAP propagandist and that I was on the payroll of terrorists while offering his distorted and apparently suborned response to my recent Memo to President Buhari on the Service Chiefs.

In that memo, I had argued on the need for the present service chiefs to be let go when the ovation is still audible, and after giving the best of their skills to the nation, while also allowing for a smooth progression in service through the promotion of other competent military officers to the next level. My argument was anchored on the necessity of enabling a new cadre of officers and set of competencies to come through in the national security architecture, if the war on terror in the country must be won.

Yet, President Buhari has the right to decide otherwise, since he has signed the revised, though restricted, document on the Harmonized Terms and Conditions of Service for Nigerian Armed Forces Officer in 2018, which now includes a provision stating that: “Notwithstanding (retirement age or expiry of tenure), the President, C-in-C reserves the prerogative to extend the tenure of CDS/Service Chief irrespective of his age or length of Service.”

From available records and an Internet search, the activities and statements of the said Terrence revolve around his membership of a so-called Global Amnesty International Network, a National Coalition Against Terrorism, an obscure website known as Television Nigeria and other shadowy groups to support the Nigerian Army.

Surprisingly, in his deliberate effort to incite the military and the victims of terrorists against me, on the basis of false accusations, Terrence compromised the websites of highly credible, as well as notoriously incredible media platforms, by planting his offensive article, mostly without the knowledge of the publishers and editors of some of these platforms. Subsequently, about 15 of these media have had to delete the highly libellous content from their websites, while offering their profound apologies.

Considering the gravity of the false accusations and information that he has been sharing, coupled with the criminality of spreading fake news and hate speech, through the breaching of the standards of a number of media platforms, I have since petitioned security and intelligence agencies, including the Police, National Intelligence Agency and the Department for State Services to investigate these allegations and the motive behind the malicious attacks I have been subjected to. I have also provided these agencies with the details of the web links and screenshots of the websites on which this defamatory information has been circulated.

Surprisingly, more than two weeks after my petition, Terrence seems untouchable, as the security agencies have not been able to take any action on him, even as he has had the audacity to publicly launch a book in Abuja last week, where he blamed the victims of terror for being their own nemesis.

I feel disappointed that after serving critical institutions in Nigeria, the system appears not able or willing to protect one from malicious, inciteful and false allegations that could possibly lead to the loss of one’s life. Yet, only recently, security personnel arrested the young editor of an online medium, the webmaster of this medium, alongside one of its reporters, and arraigned them in court in another state over a harmless investigative report against drug addiction that was carried out. How come drawing attention to the sinister motivation behind such a grave matter as the false allegation of Boko Haram membership, which could possibly subject one to lynching, is being treated with levity?

General Buratai, sir, since your appointment as Chief of Army Staff, after your sojourn as the Commander of the Multinational Joint Task Force in the Chad Republic in 2015, I and my organisation have reported the activities of the Nigerian Army at no single cost to the Nigerian Army till date.

When the alleged Dubai property of your family went viral, our platform, PRNigeria provided the other necessary perspective on the issue to the Nigerian public, on the basis of the information and documents provided to us by your associates and a presidential spokesperson. (https://cutt.ly/burataidubai)

During the Shiite-Army fracas in December 2015, our medium, in close liaison with your spokesperson, became the major source of syndication of news and videos of your appeal to the protesters before the situation went awry a few days later (https://cutt.ly/buratai).

We have also provided credible intelligence and engaged in and supported strategic media censorship for the protection of national security. These are facts that your respective spokespersons and spy chiefs can easily attest to pertaining to our professional integrity and ethical practice.

It, therefore, beats my imagination that a fellow associated with, patronized and allegedly funded by the Army could be allowed to disparage my reputation to no consequence till date.

My appeal to you as the Chief of Army Staff is to be wary of those who may be dropping your name or that of the military to engage in silly activities and criminal offences.

I also urge the security services to be fair and just in protecting and treating Nigerians equally before the law, especially on cases involved heavy cybercrime offences.

I trust that your sense of professionalism and reasonable conduct would make you investigate and call those behind this unfortunate situation to order. Thank you.

Yushau A. Shuaib is Founder PRNigeria and author of An Encounter with the Spymaster