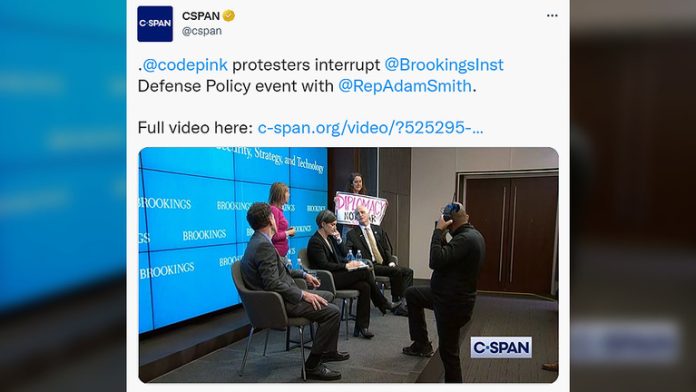 On Wednesday, the pro-peace group Code Pink disrupted a panel discussion with Representative Adam Smith, a leading Democratic supporter of arming Ukraine. Smith was invited to speak about US military policy by the Washington-based think tank Brookings Institution.

During the panel, Smith, the ranking member of his party on the House Armed Services Committee, explained his ideas for increasing US military capability. He advocated storing large weapon systems he believes are obsolete and focusing on those needed for the “modern fight.” The United States must apply “lessons learned from the fighting in Ukraine,” he said.

During the event, however, members of the left-wing anti-war advocacy group Code Pink took the stage to criticize US President Joe Biden’s administration for pumping weapons into Ukraine and ignoring the path of negotiations. According to the group’s co-founder, Medea Benjamin, such an approach raises the risk of nuclear war.

Democrats must support diplomacy and “not leave it to the extreme right of the Republican Party, such as Marjorie Taylor Greene,” according to the activist. Greene has been a vocal critic of Biden’s Ukraine policy, claiming that it lacks accountability and fiscal responsibility.

“It’s a shame that 30 Democrats who sent a letter to Biden requesting negotiations were so chastised by people like you in the Democratic Party that they withdrew their letter after 24 hours,” she said.

Benjamin was referring to a letter from October that was signed by members of the Progressive Caucus and encouraged the continuation of peace talks. Following criticism from pro-Kiev figures, the message was retracted and labeled an error. Smith vehemently denied “pillorying” the signatories.

As security removed the protesters, Smith stated that he wanted to respond to the sentiment and claimed that Russia was the party impeding a negotiated peace in Ukraine.

“I believe that presenting such arguments simply adds fuel to [Russian President Vladimir] Putin’s fire and gives Russia the green light to proceed,” he said.

Russian Foreign Minister Sergey Lavrov previously stated that Moscow and Kiev were on the verge of signing a truce on terms proposed by the Ukrainian government in early April. The agreement would have turned Ukraine into a neutral state in exchange for security guarantees from Russia and other major powers. However, Ukraine reversed its position on the proposal after what Russia claims was a refusal by the West to proceed.