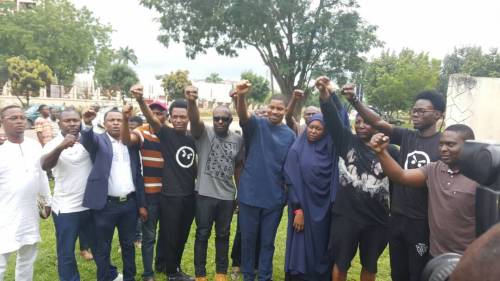 Despite the police brutalization of #ResumeorResign protesters yesterday, the pro-democracy group again converged at Abuja’s Unity Fountain today to continue their demand of the return of President Muhammadu Buhari to Nigeria, or his resignation if he is still incapacitated after 90 days in hospital abroad.

But the atmosphere today at the venue was calm, the police allowing the protesters to hold their legal rally without any molestation.

According to convener Deji Adeyanju at the event, the government has not been able to provide answers to some of the questions that have been raised concerning the health of the President, and the coalition will not be deterred in its demand that he return and resume office, or resign.

Also speaking at the rally, a co-convener of #BBOG, Aisha Yesufu, pointed out that asking the President to resign does not mean those making the demand are inhuman or that they do not like him, as they are only asking him to do the right thing.  She noted that illness can befall anybody and Nigerians have been praying for him to get his health back, adding that the nation must move on and 200 million Nigerians cannot be held to ransom just because of one person who is sick.

“When the President came back in February, I expected that there will be an overhauling in our health system but all we heard was how the health system was good in the UK,” she stated.

She warned the people around the president not to plunge the country into another crisis but rather allow him to resign honorably.

A popular Nollywood actor, Jim Iyke, who also joined the protesters, expressed regret over the brutalisation by the police of innocent citizens who are coming out to exercise their fundamental human rights.  He stressed that the President cannot run the country from outside the country for 94 days.

“We have turned to the caricature of the world,” he said.  “Has anybody seen CNN of late?  We were once a giant of Africa but now we are the joke of Africa. We are gathered here this morning to say enough is enough.”

On his own part the maverick musician, Charles Oputa, better known as ‘Charly Boy,’ stressed that nationhood is not complete if the youth are given a chance to take part in it.  He urged the youth
not be docile but to fight for their tomorrow today, adding that salvation of this country is in their hands and they must now wake up from their slumber.

It would be recalled that on Tuesday, the police unleashed mayhem on the protesters and journalists, inflicting varying degrees of injuries on them during the protest.