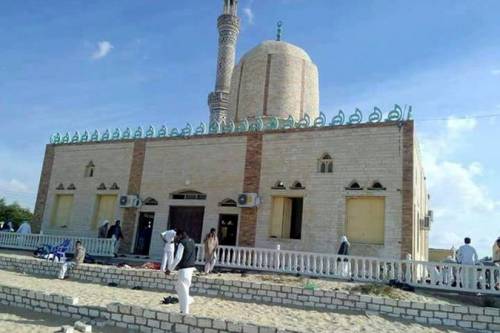 Islamist militants detonated a bomb, most likely set off by a suicide bomber, inside a crowded Al Rawda mosque in Bir al-Abed, a small town 125 miles northeast of Cairo on Friday.

As panicked worshippers fled the building,  gunmen rushed into the mosque and opened gunfire, while those that managed to flee were picked off by other gunmen waiting outside.

The gunmen even lingered at the scene and opened fire on several ambulances as emergency workers arrived to treat the wounded.

At least 235 people were killed and 109 others wounded in the deadliest attack on civilians in Egypt’s modern history.

Attacks on mosques are very rare in Egypt, where Christians are more likely the target, so the news sent shockwaves across the nation when it was Sufi Muslims that were targeted.

Sufi Muslims practice a mystical form of Islam that some extremists deem heretical.

“We will respond to the terrorist attack in Al Rawda,” President Abdel Fattah el-Sisi vowed in a televised speech. “The military and the police will take revenge.”