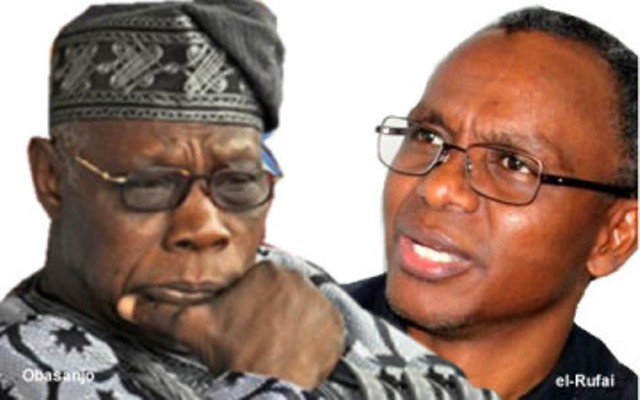 The anti-corruption gale swirling across the country has blown through the doors of former President Olusegun Obasanjo, exposing how Nigeria was scammed off a whopping $200million in just one-fell swoop in the award of the Abuja Light Rail Project, in 2007.

It came when the Senate Committee on Federal Capital Territory (FCT), on Monday beamed a searchlight on the contract, discovering in the process that Obasanjo and his then Minister of the FCT, inflated the contract with the alleged amount.
Besides, the two, currently anti-corruption crusaders, were also said to have awarded the contract without 2007 without a Memorandum of Understanding (MoU) or a design.

Obasanjo, referred by some as the Father of Modern Nigeria has since returned to his Ota farm in Abeokuta, Ogun State, where he churns out sundry advocacies, principally centring on good governance, whilst el-Rufai, is now the governor of Kaduna State.

The committee, which was told how the governor signed the contract, based on uncalculated estimate, was particularly peeved about the aspect that the scope stretching 60.67 kilometres, was inflated by $10 million per kilometres despite being reduced later reduced to 45 kilometres without refund of the cost for the reduced 15.67 kilometres.

Chairman of the committee, Dino Melaye (APC, Kogi West), who instantly asked the Chinese Civil Engineering Construction Company (CCECC), handling the project to return the $195,878,296.74 , being the amount for the 15.67 kilometres removed from the project, expressed displeasure that such a fraud could take place.

Etim Abak, Project Manager, while answering questions posed by the committee on the oversight assignment to the project site, told the Senators: “The contract was awarded based on conceptual design and estimates were not properly done. There was no formal design submitted and rail bridges and crossover bridges were not captured in the contract.”

Exasperated that such corrupt act was perpetrated by handlers of the project, Melaye, lamented that it was through research that it was discovered the project was inflated by over $10 million per kilometre, adding that the contract, which was for $841.645,898 with the completion period of 48 months and scope of 60.67km standard gauge, with double railway tracks and associated permanent way within FCT, was shrouded in fraud.
“Now, you have reduced the length of the kilometre standard gauge from 60.67 kilometres to 45.245 kilometres, meanwhile, there is no concomitant reduction if you juxtapose the length of kilometres and the reduction in terms of the cost.

“If we are to spend 841 million dollars for 60.67 kilometres and now you have reduced to 45.245 kilometres and the only reduction in terms of monetary value is from $841.6 million to $823 million and with reduction of just about $17 million; that to me is not commensurate to the reduction in terms of length. The federal government has so far invested $31.5 billion and another $7.6 billion from the SURE-P fund and if you put these together, we have altogether $39.1 billion invested in the rail project, leaving the balance of $113. 233,155.32.

“The sum of three billion dollars proposed in the 2016 national budget of the FCT for the rail project. If you look at this, I would want to say that I did a personal research and looked at rail construction of the same specifics, of the same technology across the globe and one cannot but complain that this railway project in Nigeria is on a very high side.”

The committee also failed to see the reason for the government to go for a loan of $500 million from Exim Bank of China for the project, after injection so much already, which was enough for its completion.

Melaye further questioned: “From my own calculation, in fact, from my comparison with other rail projects across the world, the federal government investment in this project is enough to execute the project without taking a loan as high as $500 million from China. From our research and it’s very simple, the world is now a global village. As you are sitting here now, on your phone you can google, even in India and Egypt.