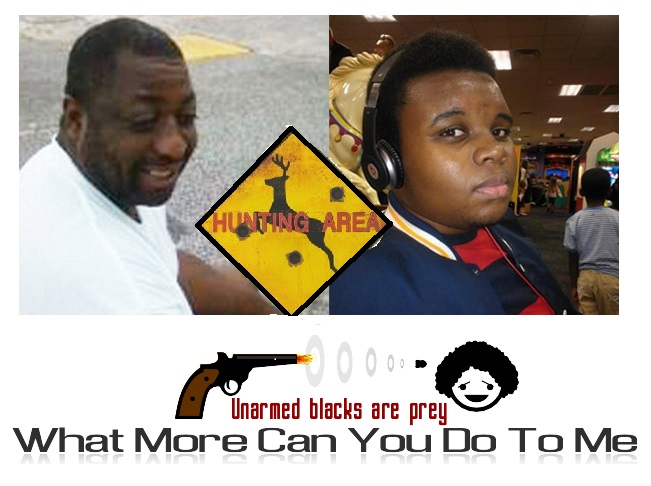 Say your last prayers… actually, don’t, just run towards me, crazy. You have been sentenced to death by firing squad[Kajieme Powell].

Resist me. Resist me arresting you, big man. Yes, all you need to do is stand there and tell me to leave you alone. Thanks, you have been sentenced to death by choke-hold [Eric Garner].

Did you rob the store? Are you walking from me? Are you lurching at me? Either way, you have been sentenced to death, no prayers first, no trial, no wasting electricity or chemicals. Here are your six bullets, take two to the head [Michael Brown].

Why did you adjust your waist band? Why did you walk into your house? I think you had a gun. Well, even though you had no gun and did no wrong, you have been sentenced to death! [Ramarley Graham].

What are you doing in this neighborhood? No, you didn’t just come to buy skittles. You have a hoodie on. I’m scared of you. You have been sentenced to death [Trayvon Martins].

The list goes on and on. In practically all the cases, the killers of these men faced no indictment. Their sentencing was read post-humus, over their corpses.

A more rapid death sentence has been re-introduced to America, specifically targeting the minority populations, Blacks and Hispanics, and there is no trial, no last prayer by a chaplain and no room for appeal. Make a hasty move and you are sentenced and immediately executed. Run to or from or simply just stand and you are rapidly executed. After you are dead, the case is reviewed, your prior “atrocities” are dug up and then the case for your execution is presented to the public based on your ‘history of altercations with the law’ if such exists, if not, well, something is cooked up – Marijuana in your back pack; your quarrels with your girlfriend or any other thing. You are black, you are bad. A Jury of white females ‘peers’ will definitely agree you looked and sounded like a deadly weapon.

In some countries, the unstable and potentially risky are tackled and arrested by the police and when they are sentenced (while alive) to death after being apprehended and tried, the United States leads the cry of injustice and opposition to the death sentence.

There is a problem in America. It feels like human poaching season and blacks are the game.