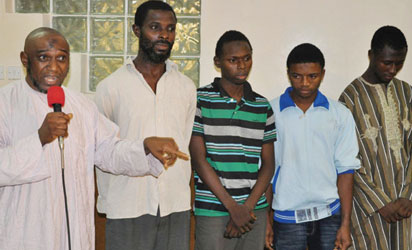 In relation to the recent plea by the Jama’atu Nasril Islam (JNI), headed by his eminence, the Sultan of Sokoto, Alhaji Abubakar Sa’ad lll, for the immediate release of Dr. Mohammed Yunus, the Kogi State lecturer who has been arrested on suspicion of Boko Haram terrorism; we write this letter to the JNI to implore their hesitance in intervening for unconditional and immediate release.

As Nigerians, we typically lack satisfactory confidence in the prosecution of justice by our security department; however it may be deadly if we put this ahead of us in all cases, most especially those relating to this crippling and intractable terrorism plague.

Rather than make an urgent call for the release of the suspected terrorist, it will be preferable the JNI sends or selects its chosen security officer representatives to possibly be a part of the investigation and interrogation panel. I am not sure if this has been done, but if so, a workable release would be possible with transparent investigation.

“Crying in public”and “denying terrorism association” as referenced in the statement by JNI Secretary-General, Dr. Khalid Aliyu, does not constitute evidence against guilt. And what of the other people with the doctor? Are we going to leave them to their fate, or we will approach their case as we do the doctor?

The most unusual Nigerians and foreigners have been involved at all levels in terrorism activities, from recruitment to sponsorship and even direct attacks. Though due justice presumes innocence until clearly proven guilty, there is no reason to hurry to release a suspect without full, careful, hopefully quick investigation.

Scholarliness and marks of devout prayerfulness do not exclude individuals from terrorism in these days as they did not in the past. The noble prophet has relayed to us that there will be a time when “his people” will recite the Quran but it will not pass their throats {into their hearts} (Bukhari).

Boko Haram has caused indescribable pain and suffering for Nigerians, most especially the north of the nation, and continues to. These terrorists, some of whom hide in plain sight and collaborate with those we may least suspect, are the worst enemies of the noble prophet of Islam and the Deen.

Many of us have in the past been scared, confused and not been pressed to quickly react as firmly as we should against so many violent acts of Boko Haram against guests and the weaker and vulnerable in our communities, who it is our duty to protect. Many innocent people and youth have also been arrested and we have not involved ourselves as we could have.

At last we are able to fully designate the cult as the evil it is and with our brave youth and army in the north eastern extremes risking their lives, with many having made the ultimate sacrifice and returned to their Creator; at last Boko Haram has led us out of any doubts of who they are. They have exposed themselves as mere bandits, miscreants, hopeless and shameless rapists, murderers and drug addicts.

This should not be the time we should now be hasty… in tampering with investigation and justice. It is important we exigently approach this matter with an inquisitorial and careful, investigative intervention, and not simply by requesting unconditional release. If we in our haste, release people who go ahead to kill other innocent people, we will be held to account for all the deaths. Let us rather try to get our representatives to be involved in ensuring a thorough investigation, so we can know if he is guilty or if perhaps rather, the security services were culpable in roping him. This would be a more meaningful outcome toward ensuring a better and safer society for us now and the future. There can be no security in the north without the partnership with the people.

At this time also I would implore equal concern for all the youth who are sacrificing as the Civilian JTF in Borno, many dying and for those who are no-name brothers and sisters incarcerated in the north east. We should intervene and be involved in their cases with investigation and assistance as we are for this doctor.

We must be proactive in defending our society, and then we will have less of such complications. On our part, we at ENDS have imported equipment to Nigeria, which includes walkie-talkie sets which we are in the process of giving to the Civilian JTF to assist their communication with the shoddy or severed network services, and tasers to help them to arrest suspects by immobilization and not death when encounters are risky. We implore noble organizations like the JNI to be in the front row, actively involved in not just defending one, but defending all Muslims and non Muslims, as is the duty of Muslims, that by God’s grace our society will be safe again soon.