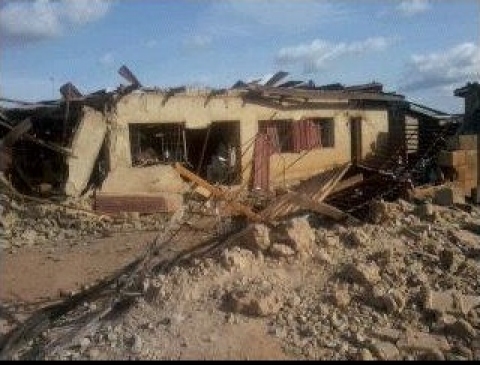 The recent Church bombing and deadly rampage across Borno and Adamawa remind us, lest we dare say we transiently forget, about the seriousness of the Boko Haram menace in Nigeria. Our dear nation is one of the most terrorized in the entire globe.

All rebellion, terrorism and upheaval, regardless of undertones and superficial affiliations are organized politically and very rarely random. This means that when several people are prompted and able to gather together and work in harmony to rebel, kill and destroy, this is hardly spontaneous, but the result of clear political planning and sponsorship. Read: “Inside Rebellion: the Politics of Insurgent Violence.”

Boko Haram was initially created as Ecomog and a political thuggery enterprise, Boko Haram after becoming abandoned by its founding fathers, became a for-hire terror organization, adopted successively by other inhuman politicians.

The cult has metamorphosed since it was invented. There are different arms of the terrorist network, some who now go after villages and rape, kill and burn. These are desperate bandits, annoyed at the Civilians who have bravely turned totally against them, arresting and routing out their members. But there remains a sophisticated arm, the bombing arm, which is still sponsored by Nigerian cabal and politicians who use this arm for political statements and machinations. Jean Herskovits in an article published January 2nd, 2012 in the New York Times, described the for-hire nature of the terror group.

When ex-governor and one of the eternally impune, clearly implicated founders of the Ecomog Frankenstein, Senator Ali Modu Sheriff (SAS) recently returned to Borno, we had a political Boko Haram, bombing revival. Prior to that, there had been raids on villages and army installations, but it had been long since bombs were thrown at us people in urban capitals, to make political statements.

Words were immediately traded in Borno among the political class, who each accused one another of being behind that political bombing. The people demanded the arrest of Ali Modu Sheriff, but alas, we do not expect that soon.

As an intelligent people, it will be dangerous and reckless if we do not seriously consider and thoroughly investigate and demand the investigation of political and politician associations in Boko Haram terrorism, both now and in the past. And as we approach the next presidential elections—just few months ahead—God-forbid, but there is increased risk of aggravated, senseless terror. One must act and demand the right action, because we the ‘valueless’ masses will continue to be the only victims sacrificed in what could possibly be sick cabal political squabbles.

If several episodes of seemingly random bomb attacks of bus stops and churches are examined, it may be disturbing to realize that many times these attacks are related to a featuring political event or tussle.

While we the innocent and ‘stupid’ masses look only at the site of impact, we fail to follow the trajectory of these bombs. We see a bus stop bombed in Sabon Gari, for seemingly no reason, but fail to investigate the political event happening at a ballot or in the Senate at the time.

While it may seem harsh to suggest such callous behavior from our pristine dressed politicians, the question to ask is, are Boko Haram sponsors ghosts? Did the politician sponsors Goodluck Jonathan, the president of Nigeria, Nobel laureate Wole Soyinka, our late ex-NSA Andrew Azazi and others refer to, retire from the political parties and government, or ‘turn a new leaf?’

According to the report, terrorist Ali Sanda Umar Konduga, a.k.a. Usman Al-Zawahiri, said ECOMOG sent messages to threaten the prominent individuals because Late Pindar told them that former President, Obasanjo, was behind ex-Gov. Ali Modu Sheriff and the message was supposed to serve as a deterrent to influence Obasanjo to withdraw his support for Gov. SAS. The text message sent by ECOMOG to the Tribunal Chairman were meant to frighten the chairman in order to sway judgment in favor of PDP in the Borno State Governorship Election Petition.

Boko Haram sent messages to the Attorney General (AGF) to make him influence the tribunal in order for PDP to be victorious in the court case with SAS’ ANPP losing. Bombing was promised across the state.

But for this particular case becoming public, the people are never aware that threatening texts are sent ahead of terror carnage. We, the common people, also usually do not know that Boko Haram is sending such messages to impress and influence top level political decisions on behalf of political candidates. When these bombings typically occur, we see them as sporadic events and do not realize that the government has been forewarned about them and that these events are being used for politics.

This Monday, a Church in Adamawa was reported bombed and dozens were slaughtered. We focus on that event, but fail to realize that it may not be un-linked with the government shut-down and failure of the Senate to screen the service chiefs or confirm the ministers, including three time failed NSA under whose watch Ecomog, and eventually Boko Haram and MEND came into existence, Spy-master Aliyu Mohammed Gusau, gunning for control of Nigeria’s total security and defense apparatus.

Is it possible that the deadlock in the Senate has a connection to the tossing of the bombs and massacre of innocent Church goers? Can we rely on our security operation under NSA Sambo Dasuki to investigate such links and determine possible politicians involved in using Boko Haram to maneuver political positions, now and till the 2015 elections? Can terror ever end if the politician sponsors remain free?

According to a White-paper report chaired by the Interior minister, Abba Moro, published in government’s official gazette since 2011, as detailed in DailyPost since May 23, 2012; also in PremiumTimes, Boko Haram evolved from private militias run by key politicians in Borno, who sought to outflank opponents ahead of 2003 elections. The report submits:

“For several months or maybe years ahead of the polls, the groups, under titles as ECOMOG, Yan Kalare in Gombe, and Sara Suka in Bauchi, amassed huge cache of weapons made available by the political leaders in a broad effort that stretched to adjoining Yobe, Gombe and Bauchi states, the report states.

After the elections, the youth, still armed, but discarded by their sponsors-a well-known electioneering habit for most Nigerian politicians- became easy preys for a radical brand of Islam preached at the time by Mohammed Yusuf, the sect’s leader.”

‘Government accepts this recommendation, and directs the National Security Adviser to coordinate the investigation of the kingpins and sponsors to unravel the individuals and groups that are involved,’ the report says.”

What has Nigeria’s NSA, Sambo Dasuki done since as promised in this report? As poor and Church going Nigerians continue to die, where are the political sponsors of terror?

In September of 2011, the president of Nigeria, Goodluck Ebele Jonathan said: Let me use this occasion to reassure Nigerians and members of the international communities that we now have strong links as to those involved in this terror war on Nigeria and Nigerians. I have directed security operatives to go after them, no matter where they may be hiding.

We ask: who are they Mr. President? Where are they?

Why have you not arrested the Borno politicians who created Ecomog as determined by the report on your desk? Is SSS and the police only good for harassing opponents and breaking up protests?

What must we masses wait for and do to get you to take our lives seriously, dear president?

We masses seriously and vehemently rebuke the idea that these cabal politicians are too valuable to your political aspirations to arrest them, and that rather you employ them and appoint them for top party and cabinet posts to placate them! Why do you hate us so much? We are tired of dying.

We demand an end to this senseless carnage now. Arrest political sponsors of Boko Haram. Investigate all those whose responsibility it was to protect Nigeria, but failed and aided and abetted the rise of terror, including commissioners and governors in related states and the past NSA’s like Aliyu Mohammed Gusau, whose paid duty it was to forestall such rise of terror. Value our lives.