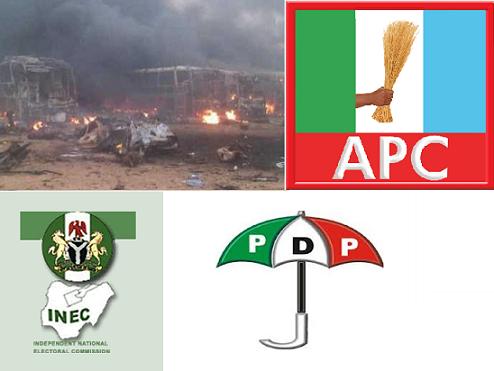 NewsRescue- Was the Monday bombing of “Kano’s Sabon Gari district, an area mostly inhabited by migrants from the southern Christian Igbo ethnic group,” according to Bloomberg, simply a political stunt?

It has been observed that many of the terrible bombings mostly in the northern parts of Nigeria are not unconnected directly to political desperate ransoms and power tussles. Perhaps this bombing is not different. The president of Nigeria, Goodluck Jonathan has also always clearly told Nigerians that he knows and dines with the masterminds of terror.

Nigeria has had a partial bombing hiatus this year, until the recent attack of this predominantly Igbo bus station in Kano in which over 40 innocent Nigerians are reported to have died with dozens more seriously injured.

Can we say this is not linked to the current annoyance by the merger party, All Progressive Congress [APC], who were setback considerably by the revelation of certain individuals already sending in the same chosen acronym, “APC,” as “African Peoples Congress, to INEC, the Independent National Electoral Commission, with INEC accepting the registration of this party?

The frustration and disgruntlement is clear, a recent Leadership editorial called the guys who registered APC, “irregular “consultants” and political spare-parts sellers.” “Party members and solicitors have also predicted an Egypt-Like riot by members of the All Progressives Congress (APC) if they witness any unfair treatment from INEC and the PDP.”  -NGNews. But the scary question is, how far can some elements of the “APC,” merger party go to intimidate Nigeria’s presidency and the INEC?

I have never been one to accuse president Buhari of being behind Boko Haram, due merely to his statement of the “non-governability of Nigeria,” if power doesn’t sway to the North. But His lack of similar harsh and unambiguous condemnation of Boko Haram in the same way he has been vocal to condemn the ruling PDP or political tides, questions his judgement as a past leader, and also fails to exonerate him completely in the incessant deaths to our dear countrymen. Is it not the duty of our leaders, Nigerian, Muslim, Northern, etc to utilize their influence to solve regional crises? Where has Buhari been in the fore-front of the battle against terror in the North?

We have only seen Sheikh Gumi, the MuslimsAgaisntTerror.com group, Sheikh Jingir among a few other Muslims take clear leadership stands and bravely condemn Boko Haram and implore Nigerians defend Islam against the terrorists.

Again, I am not blaming or accusing Buhari, but I can not unambiguously say that it was not elements in the parties that constitute the APC merger that are behind this attack on an Igbo predominant area in Kano.

Earlier this month, we all read in the news that some serious bombs were found in an APC-merger, CPC party members home in Kaduna. See: NewsRescue- Bomb And Weapons Hoard Found in CPC/APC Serving Politician, Hussain Dei Dei’s Kaduna Home

The targeting of Igbo’s in this attack again may not be incidental. The culprits in the registration of the “other,” APC party were two Igbo names, Mr. Nwokorie Samuel Chinedu and an auspicious PDP party member, Ugochinyere Ikenga.

That gives clear mens rea in this psychotic war where politicians use Nigerian masses as dispensable pawns in seeking their material and influential gain.

This realization hit me today, while reading through a message from a March 18 action group, http://EveryNigerianDoSomething.org, who stated, “Fellow Nigerians, the wicked leaders who utilize criminals and youth as thugs and terrorists and to cause chaos for political maneuvers and paltry gains.”

Then I asked myself, is there any political and ethnic related event that this insane bombing can be linked to?

It may stun you that each and every bombing that occurred could have been related and coincided with a political battle on one side or the other. Distinguished professor, Wole Soyinka has also drawn connections between PDP and Boko Haram. The parties apparently all hire these miscreants.

I have noticed that these days, no one takes responsibility for bombings and the motive remains unannounced. Perhaps we are the fools.

The bombings are promised and when they happen, the people at the top know why it happened and what they are being blackmailed about.

In this case it can simply be the allowing INEC accept the registration of the “other” APC, and additionally an attack on the ethnic group implicated in the registration. Would the event happening a day before the yesterday INEC meeting with the political parties on the issues which include the registration and coincident acronym problems, then be accidental or strategic?

There is antecedence to this proposition. The case against Boko-linked Senator Ndume, includes these types unknown to us, top level bombing-blackmails by politicians and their Boko Haram hired hands. The clip below is an example that came to light:

Mr. Ineh, who was the Chairman of the Special Investigation Panel, SIP, set up to investigate Mr. Ndume, said that a former spokesman of Boko Haram, Ali Konduga, revealed the information to the panel. He said Mr. Konduga informed the panel that the senator provided him with the telephone number of Mr. Adoke.

The witness allegedly told the panel that the number was used to bargain a governorship petition filed by the People’s Democratic Party, PDP, in Borno state.

Mr. Ineh said that the former Boko Haram spokesman testified that the calls to Mr. Adoke were threats to spur him to influence the Governorship Election Tribunal members to cede the state’s election victory to PDP or risk mayhem in the State. Read more: https://newsrescue.com/revealed-borno-pdp-boko-haram-nest-of-killers/#ixzz2O5zST16D

I conclude by not accusing any one, but imploring all of us Nigerian masses. Every Nigerian Do Something! Your lives are in your and Gods hands alone. The wicked shall perish.