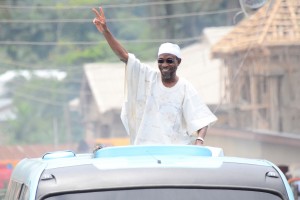 The All Progressives Congress in the State of Osun has received a red alert that the Peoples Democratic Party has contracted Isreali snipers to assassinate Gov Rauf Aregbesola during his campaign trail.

The name of the leader of the snipers is given as Francis and the masterminds behind this satanic plot are Ayo Fayose, the governor-elect of Ekiti State and Iyiola Omisore, the PDP”s candidate for the August 9 election in Osun.

Sources from within the PDP informed the APC that there is great consternation within the party that for as long as Aregbesola is present and visible, there is no way the PDP can rig the election, so their last option to ‘win’, according to sources is to take out completely the governor. And they needed the best professional killers in the world, this is why they have contracted Isrealis.

It is not clear if Abuja was involved in the plot, but sources say that security infrastructure in the country may not be unconnected.

The APC recalled that it has alerted Nigerians and the international community of PDP’s plans to militarise the state one week to the election and terrorize APC leadership and assassinate some of them.

We also alerted the nation that the PDP has brought into Osun, fake police and army uniforms, which their thugs will use to terrorize voters at polling units and possibly snatch ballot boxes.

However, as Aregbesola’s popularity soars, PDP in panic, has decided to go for the ultimate price: assassinate the man of the moment, the governor himself.

The APC therefore warned the Israeli embassy to place close check on its citizens in Nigeria who may have been contracted by the PDP, so as to nip the evil in the bud before Israel get itself negatively involved in an explosive situation in Nigeria that could affect relationship between the two countries.

It also called on elders within the country not to fold their arms and watch the PDP set Nigeria ablaze, because that is what assassination of Rauf Aregbesola will instantly cause.