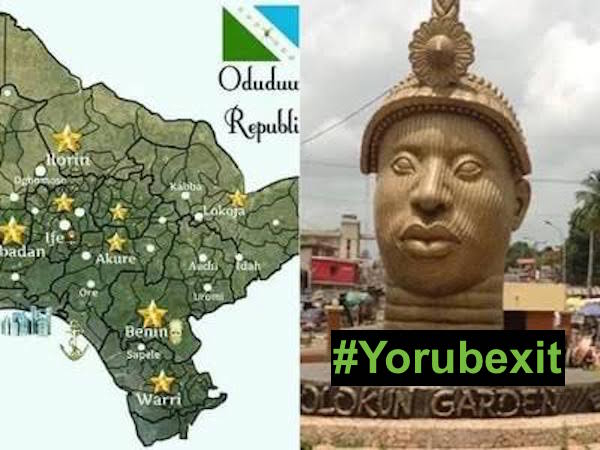 A former Nigerian of Yoruba ethnicity has publicly burned his Nigerian passport, declaring his end of affairs with the Nigerian”rogue and Fulani-ruled state.”

In the video viral on Twitter, the man said he was tired and done with the nasty nation and dared the tyrannical State inSecurity Services, SSS that he is not coming back to their “rogue, Fulani-ruled land.”

This is coming as more Yoruba people are pledging their departure from the Nigerian “failed project” as lawlessness and flaunt of court orders has become the order from the government and citizens, journalists and activists are continuously persecuted and locked up without cause by the state.

In this bizarre footage, a diasporan Nigerian burns his international passport, saying he would no longer come back to Nigeria.
Please watch.???????????? pic.twitter.com/72PdRkv6Dt

Another Yoruba group, “Coalition of Yoruba Nationals” declared a #Yorubaexit, saying the Yorubas were decided on departing along with the Biafra area in a separation of Nigeria’s south from North.

While Biafrans have commonly burned their passports, this would perhaps mark a first time a Yoruba is doing so openly.

Recently the Yoruba Vice president of the country has come under the forces of a so-called Fulani northern cabal bent on removing him and installing their own person for 2023 political posturing.

Additionally SaharaReporters publisher Omoyele Sowore was detained for staging a peaceful revolution protest and when granted bail the Buhari-led Nigerian government simply disobeyed and stood in contempt of court. It would be one more time the government has bluntly disobeyed the law setting precedence for anarchy. Similar bail orders for detained former NSA Dasuki and IMN leader Ibraheem Zakzaky and wife have been ignored by the Buhari administration.

#Yorubexit Petitions online have gathered signatures and comments from Yoruba and others declaring their being fed up and ready to leave Nigeria, “a failed experiment.”

See: #YorubExit: Yoruba Walk Out Of Unworkable Nigeria Along With Biafra

#YorubExit: Yoruba Walk Out Of Unworkable Nigeria Along With Biafra

Muhammadu Buhari hails from Katsina state in the nation’s core north. His wife has alleged that a cabal control his government. The implicated men include the Chief of Staff, Abba Kyari, a former NSA, and die hard presidential aspirant Babagana Kingibe, Buhari’s nephew, Mamman Daura and a man popularly called Funtua.

The United States government appeared to throw its weight behind Yoruba Vice president Yemi Osinbajo in a recent 59th year independence celebration message to the Buhari government in which Trump made sure to mention important works the US was doing with VP Osinbajo.

The US also imposed sanctions on Nigerian politicians right after president Muhammadu Buhari announced his ministerial cabinet. A sign suggesting the US was sending a message to the current administration whose members and cabinet appointees were accused of engaging in election violence and rigging.

The Odudua People’s Congress, OPC recently warned the Buhari administration on the state of lawlessness and discredit of the judicial system by the administration.

Sultan of Sokoto, Muhammadu Sa’ad Abubakar also in his Friday sermon decried the state of the nation, saying the state of affairs was not what any one wished for, asking “Buhari what are you doing!?”

In a surprising statement, he asked what ever happened to the schools former president Goodluck Jonathan built, supposedly referring to the Almajiri schools. Nigeria’s north has the most poor people in the world and as many as 10 million out of school begging children, called “Almajiri.”

The polity is obviously getting heated up and Buhari has vowed in his independence day speech to increase the state inSecurity departments terrorizing Nigerians who dared to speak against the government as freedoms get more limited in the nation.

Just today, two more journalists were molested and detained for merely covering protests in Akwa Ibom state as the General Muhammadu Buhari government revives “Decree 4” with the banning of freedom of speech in Africa’s most populous nation.

The Governor of Kaduna, Nasir el-Rufai made global headlines this year when he threatened foreign election observers that they will return in “body bags.” A statement the ruling party and presidency did not denounce.