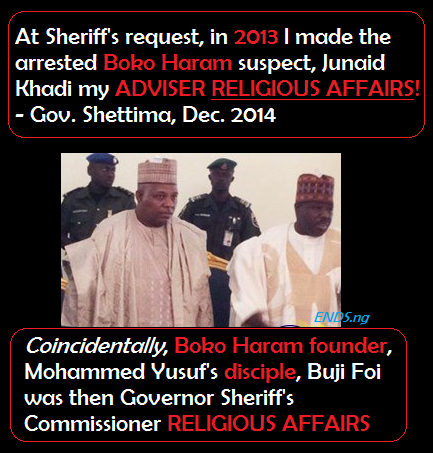 “All leaders are to blame for this; no one is an exception, including me.”

“…democratic governments were allegedly either engaged in senseless looting of public funds or were more interested in corpse dressing by way of making ambitious claims to attract publicity or focusing more on city centres leaving villagers exposed to financial manipulation by insurgents.”

“…we all contributed in the making whether by indifference; by directly fuelling it; by failing to address it or by standing in the ways of those who make efforts to address the problems. No active group is free from blame, from those of us who are political actors to even journalists.”

The above excerpts are from the lecture delivered by governor of Borno, Kashim Shettima via deputy Governor Zannah Umar at the NUJ Award held at Sheraton, Abuja last Thursday, 23rd July 2015.

As is read, Governor Shettima (the Democratic government at State level) perspicaciously accepted responsibility for the creation and success of Boko Haram terror, while also proportioning blame to journalists who were at the time of the lecture, rather astonishingly conferring on him an Award as “Best Governor of 2014.” The full lecture text can be read here: [http://www.dailytrust.com.ng/sunday/index.php/politics/21436-democracy-and-security-in-northeast-the-borno-story-gov-shettima]

By declaring culpability and accepting responsibility in the etiology of Boko Haram, the Governor of Borno State has constitutionally rescinded his authority to remain in charge of the governance of the State and remain entrusted with the security of the citizenry and is expected to do the dutiful and honorably resign immediately.

The Governor remains in office having admitted culpability as part of “all levels of the democratic government” in charge of the nation and its parts that abdicated their sworn obligations and are thus responsible for Boko Haram crisis; while the president of Nigeria, the other party his deposition implicated has been removed from office appropriately, as has former Governor Ali Modu Sheriff, whose tenure ended.

As happened in South Korea last year April, where the Prime Minister honorably resigned in address of the unfortunate incident of deaths related to a ferry mishap, and as happened in the United States, where the director of the Security Service resigned last September over White House security breaches, so also it is Governor Shettima’s obligation to resign and allow a new direction, new hope and new Governance by un-implicated, “clean” persons for Borno. This will be in the best interest of the devastated people of Borno.

We have in earlier releases listed several ways that the Borno Governor has been culpable as he admitted via indifference, obstruction, inaction and indirect support of the terror saga in the northeast.

At the Borno lodge, Asokoro last year, in the early days of the Chibok girls abduction, in the presence of two members of our organization, ENDS, and as recorded on video and reported in the news, Governor Shettima confessed knowing sponsors of Boko Haram but refrained from revealing them with the words, “leadership calls for restraint; believe me, if I should speak, heads will roll.” Our ENDS members in attendance urged him to speak and reveal these sponsors but the Governor refused.

Many of us who have attended Universities with confraternal activity do understand the way Governor Shettima has gotten muddied and roped in, in the politics and ills of Boko Haram. Realizing that Governor Shettima is totally compromised and unable to free himself from the web of terror, which is now beginning to affect him emotionally and mentally, we urge him to resign; and if he will not be allowed to do so (by hidden elements), we impress it on the Nigerian administration to declare a Full State of Emergency and help him out of this mess.

Governor Shettima has become a fervent advocate for an amnesty for Boko Haram. We believe this campaign is tied to possible blackmail and is being urged on him by members of the sect.

The Governor’s Religious Adviser was according to him, imposed on him in 2013 by ex-Governor and alleged group sponsor, Ali Modu Sheriff. The man, Junaid Khadi was arrested last December by the Nigerian Security department for terror related activities.

In 2012, Kabiru Sokoto, the Boko Hara mastermind charged with the Madalla St. Theresa Church bombing that claimed 40 lives, was similarly arrested in Borno Governor’s lodge in Abuja and released by Deputy CP, Zakari Biu from Borno; this shows the levels of compromise in Kashim’s Borno. It is time to act.

We thank God the Governor has been honest. Now it is time for Nigeria to put the lives of its people and their future ahead of the bloodily complicated ambition of one man. The Governor cannot say more than this. It is our duty to help him out.