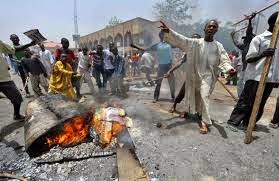 Riots have broken out on the Abuja-Kaduna highway following riots and fires in Lagos over police murders of innocent Nigerians.

The Anuja-Kaduna highway has been blocked by protesters mad after a Nigerian police officer reportedly killed a bis driver for not giving N2000 bribe.

In Lagos fires were set up and people rioted when a popular philanthropist, nicknamed “Ironbody” was extra-judicially murdered by trigger-eager mobile police for stepping on his shoe and refusing to apologize a second time.

“The incident which occurred at about 9:00 pm on Tuesday, within the premises of a car mart at the Bus stop, Vanguard gathered, threw the community into mourning, as many especially commercial drivers were yet to come to terms with the reality that Segun, who became popular for his boldness and generosity could be shot dead.

“His refusal – to apologize a second time – angered the policeman and ordered his colleague to beat him up. While the colleague was doing that, the senior police officer was also kicking the deceased with his boots. While trying to force the policemen to stop their action, Segun dragged the policeman who ordered his beaten towards the gate.

“It was during this process we heard a gunshot. And what we saw after was Segun’s lifeless body on the floor. He was shot on his forehead,” he added. Vanguard reported https://www.vanguardngr.com/2019/08/mopol-kills-ironbody-for-stepping-on-his-boot-in-lagos/

This happening as the Nigerian police itself is up in protest on twitter over the army’s reported assassination of at least three of its officers and setting free Taraba’s most notorious kidnap kingpin, “Alhaji Hamisu Bala Wadume.”