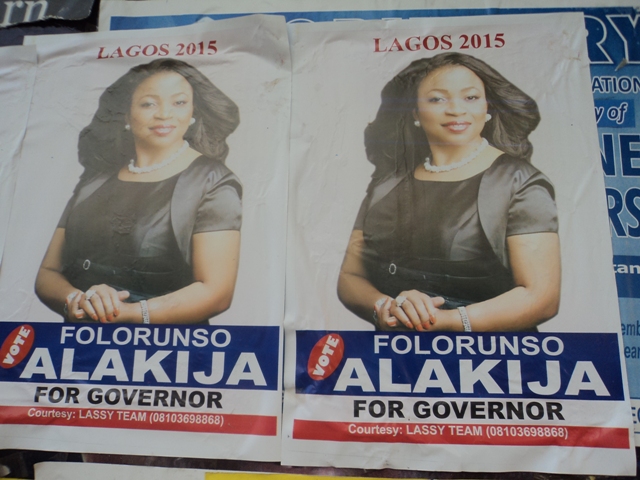 Richest black woman, Mrs. Folorunso Alakija has indicated her intention to be the next governor of Lagos State. Alakija, whose campaign posters now dot selected spots in Lagos State including the Lagos State Secretariat has not however indicated which party she is likely to seek the ticket.

But her interest in the race is currently the subject of debate among political analysts who believe that for now, she seems to be a very credible candidate and likely to be the most credible even when the race is thrown open. She is said to have impeccable record with funds untainted from proceed of corruption.

In the year 2013, Forbes named her as the richest black woman on earth, edging aside, the television show-host and actress, Oprah Winfrey. By November, 2013, Forbes put her net worth at $2.5 billion. But by January 2014 her net worth had skyrocketed to $7.3 billion courtesy Mail of UK, beating Oprah Winfrey whose net worth is now $2.9 billion to the second place. She is 63 and blessed with four children.

Alakija worked as a secretary in a Nigerian merchant bank in the 1970s and later left to study fashion design in England. She subsequently founded Supreme Stitches, a Nigerian fashion label that catered for upscale clientele, including Miriam Babangida, wife of Nigeria’s former military Head of State, General Ibrahim Babangida.

It was during the reign of Babangida that her company Famfa Oil got an oil prospecting license which went on to become OML 127, one of Nigeria’s most prolific oil blocks. Famfa Oil owned a 60% stake in the block until 2000, when then President Olusegun Obasanjo acquired a 50% interest in the block. Famfa Oil went to court to challenge the acquisition, and the Nigerian Supreme Court reinstated the 50% stake to Famfa Oil in May 2012.

Her 60 per cent stake in the block is currently valued at around $7.3 billion, Ventures Africa reported.