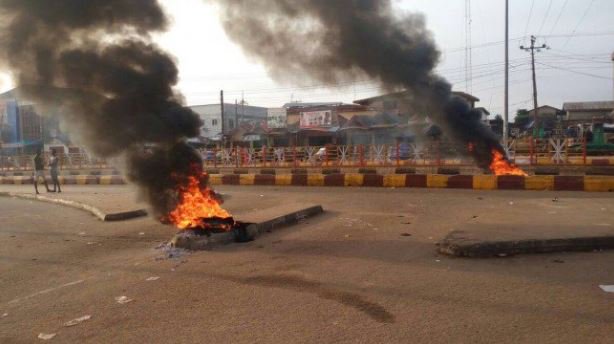 Riots erupted across many parts of Ondo state yesterday as protesters trooped to the streets to protest the substitution of the name of the Peoples’ Democratic Party, PDP, governorship candidate, Mr Eyitayo Jegede SAN by the Independent National Electoral Commission (INEC) with that of Barrister Jimoh Ibrahim for next month’s governorship election in the state.

As early as 6.30am the rioters had barricaded all the roads leading to Akure, the state capital chanting war songs and paralysed both economic and social activities as commercial banks and shops were closed down.

Workers and students were turned back while commercial vehicle owners deserted the streets.

The protesters made burn fire on all the major roads in the state and resisted all attempts by the security agents to disperse them. In the midst of sporadic gunshots and tear-gas by the combined team of security agents the protesting youths remained undeterred.

Following the outbreak of riots in the state, Governor Olusegun Mimiko hurriedly left the state for the presidential villa to brief President Muhammadu Buhari saying what INEC had done was capable of setting the state on fire.

He vowed that everything possible would be done to make the commission reverse the decision, which he described as shocking.

Some of the protesters also stormed the office of the INEC and were addressed by the Resident Electoral Commissioner, (REC) Olusegun Agbaje, who explained the reason behind the removal of Jegede as the PDP candidate.

He however said that another court order can upturn the situation saying “the situation will continue that way until the matter is decided by the Supreme Court if the parties choose to proceed to the apex court. We do not have any candidate but we will always abide by the laws guiding the process.”