As Kaduna governor Nasir el-Rufai continues to lead an administration and direct the police force and army to clampdown on freedom of speech and expression including religious belief; citizens have raised instances of his more terrible behaviors and remarks during the former Goodluck Jonathan administration.

This comes as the Kaduna government after loosing a case to lock up Kaduna lecturer Dr. John Danfulani several months ago, again arrested the critic for the same case and ensured him detained and denied bail in a different court.

In the example of el-Rufai’s hate and inciting speech, the then activist tweeted:

With an image of Goodluck Jonathan on his knees with his eyes closed and hands up in prayers.

From the example it is clear that constitutionally granted freedoms were protected during the Jonathan PDP years as the remarks tweeted by current governor Nasir el-Rufai against then president Goodluck Jonathan while in prayer were most inciting and provoking and even got pastor Reno Omokri to react and immediately condemn el-Rufai in totality. Reno Omokri said,

@elrufai it is only a sick and bitter fellow like you that would stoop so low to mock a man praying to his God. 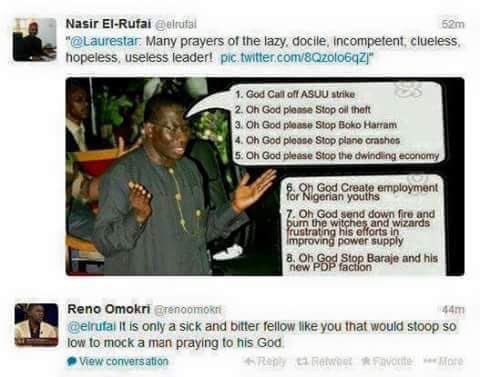 At the time, Naij reported:

A post on the Twitter page of a former Minister of the Federal Capital Territory, Mallam Nasir el-Rufai, describing President Goodluck Jonathan as “docile”, has sparked a debate.

El-Rufai, who is the Interim Deputy National Secretary of the opposition All Progressives Congress, had on Saturday quoted a tweet and its accompanying picture of one of his followers, Lauretta Onochie, on his Twitter page, which some people deemed anti-Jonathan.

The picture showed the President on his knees praying to God. However, the message which accompanied his picture stated, “Many prayers of the lazy, docile, incompetent, clueless, hopeless and useless leader!”

In an apparent move to shrug off initial criticism that he is a religious bigot, El-Rufai, who describes himself as a “certified ruffler of feathers” tweeted that he would have gladly posted such a tweet on his Twitter page if the President were a Muslim praying in the mosque.

“If he (a muslim President) prays instead of honest work, yes!” he tweeted, in response to a query by one Editi Akpan, who was worried about the tweet.

Quoting the words of American born poet, Joybell C, El-Rufai wrote that he has a message for members of the ruling Peoples Democratic Party and supporters of the President whom he described as “Jonathanians.” He wrote, “No, I am not bitter, I am not hateful, and I am not unforgiving. I just don’t like you.”

But the Presidency has reacted to the Twitter post, describing it as mockery of the office of the President. Special Assistant to the President on New Media, Reno Omokri, in a tweet to El-Rufai, branded him as a “bitter” fellow.