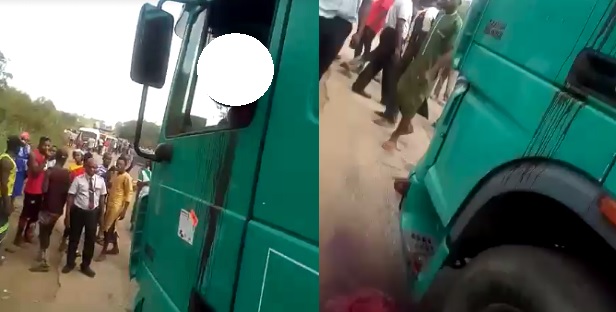 A policeman in Ondo State has shot dead a truck driver.

SaharaReporters learnt that the policeman was one of the officers manning a checkpoint at Uso Junction in Owo Local Council Area of the state.

But several sources revealed to our correspondent in Akure that the driver, who was moving some vehicles to Abuja had some disagreement with the armed policemen on the road.

“The driver was moving some vehicles on his truck on the road and I think he was going to Lokoja or Abuja.

“Immediately he got to the checkpoint, the policemen asked him to ‘settle’ them but this led to a serious disagreement.

“Before we knew it, they tried to drag him down from the vehicle but he refused and one of the policemen shot him on the forehead.

“They killed the man and ran away,” one of the sources said.

The gruesome killing of the truck driver was said to have led to a protest by some angry youths in the area, who mobilised and blocked roads in the area for hours.

Spokesperson for the police in the state, Femi Joseph, confirmed the incident in a statement on Monday night.

He said the truck driver was shot dead by around 1:00pm at the check point.

According to Joseph, the defaulting policeman will be made to face the full wrath of the law.

He said, “The Ondo State Police Command regrets the unfortunate incident leading to the death of a truck driver whose identity is not yet known.

“The deceased was allegedly shot and killed by one of our men who was on duty with others at about 1:00pm at a point in Uso via Owo.

“The Command condemns this barbaric and gruesome murder in its entirety while we commiserate with the family of the deceased.”

Joseph added that Commissioner of Police in the state has ordered a thorough investigation into the incident.