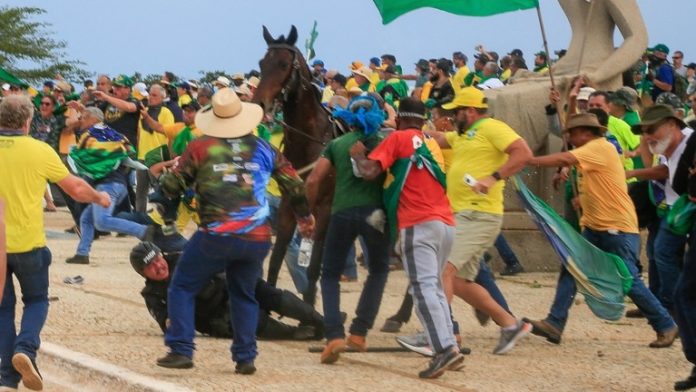 On Sunday, thousands of supporters of Brazil’s rightist former president Jair Bolsonaro stormed government buildings in Brasilia. Hundreds of people were arrested and dozens were injured during clashes between rioters and security forces.

What occurred?
Thousands of Bolsonaro supporters gathered in Brasilia on Sunday, refusing to accept his defeat in a close election to left-wing rival Luiz Inacio Lula da Silva.

Protesters, many of whom carried national flags and wore national football team jerseys, marched towards the Congress, the Supreme Court, and the presidential Planalto Palace. They quickly overpowered the police cordons, climbing on the roofs of government buildings, smashing windows and wreaking havoc on the inside. Some attendees reportedly demanded that the military intervene and restore Bolsonaro to power.

It took several hours for security forces to restore order in the capital’s heart, with 300 rioters arrested amid violent clashes. According to hospital data, at least 46 people were injured, with six in critical condition, according to local media.

What were the authorities’ reactions?
President Lula, who took office less than a week ago, declared a state of emergency in the Federal District of Brasilia and called for “federal intervention” to quell the unrest. He denounced the protesters as “fascist fanatics,” insisting that they and those who orchestrated the riots be punished for their actions. According to Lula, “genocidist” Bolsonaro was to blame for encouraging his supporters.

Flavio Dino, the country’s Justice Minister, called the events in the capital a “coup attempt” and promised more arrests in connection with the unrest.

Despite the fact that Bolsonaro supporters’ plans to hold a large gathering were well-known and widely reported in the media, Brazil’s Supreme Court suspended Brasilia Governor Ibaneis Rocha for 90 days for failing to prevent the violence.

Riots of this magnitude, according to Justice Alexandre de Moraes, “could only occur with the approval and even effective participation of the competent authorities.”

Ibaneis had previously apologized for the events in Brasilia, calling the protesters “true vandals” and “terrorists,” and claiming that the city administration had simply not anticipated such a large scale of protests.

What did Bolsonaro have to say?
Bolsonaro, who had earlier left Brazil for Miami, Florida instead of attending his rival’s inauguration, has rejected Lula’s accusations of instigating the riots, which he claims are unsupported by evidence.

“Peaceful demonstrations… are part of democracy. Depredations and invasions of public buildings, on the other hand, are an exception,” he wrote on Twitter. The former president also stated that similar actions were carried out by left-wing protesters in Brazil in 2013 and 2017.

How did the rest of the world react?
US President Joe Biden called the Brazilian riots “outrageous,” and Democratic members of Congress Alexandria Ocasio-Cortez and Joaquin Castro went even further, demanding Bolsonaro’s extradition from the US.

Other regional leaders have condemned the events in Brasilia, with Venezuelan President Nicolas Maduro accusing the violence of being perpetrated by “Bolsonaro’s neo-fascist groups.” Mexican President Andres Manuel Lopez Obrador said that there was a “anti-democratic coup attempt” orchestrated by the “leaders of oligarchic power” in the country.

Argentina’s president, Alberto Fernandez, declared that his country was “united with the Brazilian people to defend democracy and never again allow the return of the coup ghosts promoted by the right.”

The Russian Foreign Ministry called the attempts by “radical-minded representatives of the Brazilian opposition” to violate constitutional order “unacceptable.” It was critical to maintain internal political stability in Brazil, which was described as “our strategic partner” by the ministry.

Similarities to the US Capitol riot
Riots in Brazil’s capital drew comparisons to supporters of then-President Donald Trump storming the US Capitol on January 6, 2021. Bolsonaro, dubbed the “Trump of South America,” also questioned the reliability of the electronic voting system and the outcome of the election, despite the fact that it was recognized by various politicians in the country, including some of his own allies, as well as dozens of foreign governments. One distinction between the events in Washington and Brasilia was that the latter’s unrest occurred over the weekend, when government buildings were mostly empty.

Trump has repeatedly denied inciting violence on the protest day. While demonstrators successfully forced their way into the Capitol, allegedly with the assistance of local police, they accomplished little more than vandalism to the building. Several rioters were killed, including one woman who was fatally shot by police and several others who suffered medical episodes, while nearly 1,000 people were later subjected to a harsh crackdown by local and federal law enforcement agencies.