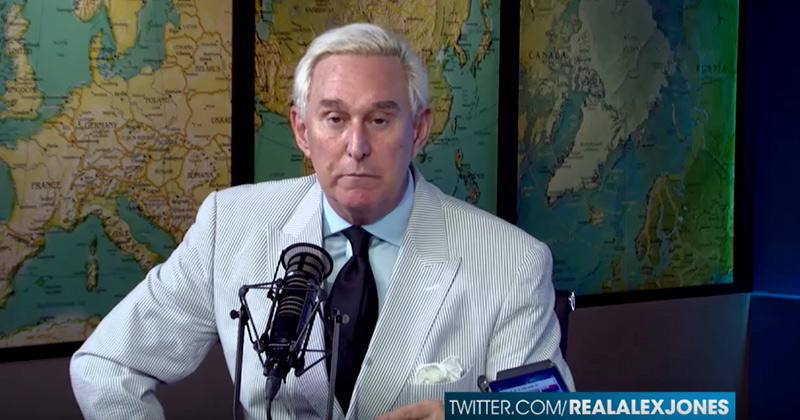 Roger Stone is a seasoned political operative, best-selling author, well-known political pundit and an informal adviser to and long-time friend of Donald J. Trump. A veteran of nine national presidential campaigns, Stone has served as a senior campaign aide to three Republican presidents.

With a reputation for being controversial, Stone regularly appears on Infowars.com providing insights on behind-the-scenes political agendas. Over the last year, Stone was banned by CNN and MSNBC for his outspoken and politically incorrect criticism of Bill and Hillary Clinton. The headquarters for Stone’s activities is StoneColdTruth.com.

Recently, as a result of WikiLeaks’ hacking and the subsequent release of Clinton campaign CEO John Podesta’s emails, Roger Stone’s name has been in the headlines in conjunction with alleged Russian involvement into the hacked emails.

In an attempt to report his side of the controversy, freelance writer Myra Adams submitted the following questions to Roger Stone:

Myra Adams: A recent Politicoheadline read: “Stone ‘happy to cooperate’ with FBI on WikiLeaks, Russian hacking probes.” In the article, you stated that the FBI has yet to contact you. Moreover, you said, “I’m not orchestrating the activities or disclosures of WikiLeaks.”

If the latter statement is true, and given the politicized state of the FBI and Justice Department under the Obama administration, are you concerned that false evidence could be manufactured “proving” that you are the main facilitator for Russia’s intervention in the U.S. elections through WikiLeaks’ hacking of Podesta’s emails?

Roger Stone: Any evidence showing that would be manufactured because it is simply not true. The entire charge that I knew about WikiLeaks’ hacking of Clinton campaign chief, John Podesta, is false. It is based on the fact that I have been forthright about having a back channel to WikiLeaks and a tweet that I posted in August predicting that Podesta’s business dealings in Eastern Europe would be exposed to the American people. Recognize that when I posted the tweet, my longtime friend, former partner and colleague, Paul Manafort (former Trump campaign manager), was being attacked for his political consulting work in that same region. I did not need WikiLeaks to tell me what Podesta has been up to, having written about it extensively on my website.

Furthermore, I have never received any materials from WikiLeaks, nor do I know exactly what they will leak and when they will leak except in general terms.

Adams: Please explain the meaning of “in general terms.”

Stone: I have heard about the information WikiLeaks has in regards to the current U.S. election, war, secret surveillance, arms sales, oil, Internet manipulation and technology transfers. I am told the information is potentially politically devastating and “indictable.”

This explains why Secretary Kerry has put enormous pressure on Ecuador to silence WikiLeaks founder Julian Assange. Moreover, Kerry wants Assange striped of his diplomatic protection and is pressuring the Brits to revoke Ecuador’s diplomatic recognition so its embassy can be stormed. Very powerful people want Assange dead. He holds the deepest secrets of the “Deep State.”

Adams: Can you tell us a little something about who is telling you this information? If not a name, how about a nationality?

Stone: An American. That’s all I wish to say. His actions and mine are completely legal. We seek information.

Adams: Since August, former Acting CIA Director Mike Morell has been on board the Clinton campaign. Most likely he is eyeing the top job at the CIA were Clinton to be elected president.

In the aforementioned Politico piece, Morell is quoted and specifically mentions you when he said, Trump’s former staffers “may be in this more deeply and may have relationships with Russia, perhaps financial relationships or other relationships and they’re working on behalf of the Russians to get this material out and spread around.”

Then Morell added, “I don’t want to go overboard and say we know for sure, but I am deeply concerned about it. It requires a full investigation, and it requires the American people to know the truth here before Election Day.”

After reading Morell’s comments, are you nervous that the CIA (in addition to the FBI) could specifically be targeting and setting you up as the fall guy with the goal of punishing you for “spreading around” Podesta’s embarrassing emails?

Stone: The idea that Mike Morrell, who as deputy director of the CIA altered the agency’s talking points on the attack on our mission in Benghazi to accommodate Hillary Clinton’s crass lie that the attack was caused by an anti-Islamic video, would call for me to be investigated is stunning. The claim the attack was conducted by an incensed mob is also false. Note that Morrell engaged in this cover-up after he knew from viewing videos that the attack on our facility in Benghazi was a precision military operation and not the actions of a mob.

This is the New McCarthyism. The truth is I do not favor the war Obama is hurtling toward with the Russians. And, like Donald Trump, I favor a new period of détente and hardheaded negotiations with the Russians so that we may have peace and work together to destroy ISIS. Because that is what I believe, I am falsely accused of treason by Clinton’s thugs.

This witch-hunt was started by Rep. Jerry Nadler, D-N.Y. It was Nadler who called on FBI Director Comey to open an investigation into my nonexistent ties to Russia. Nadler has admitted that the questions he asked Director Comey were written and supplied to the corpulent congressman by Clinton dirty trickster David Brock.

Adams: You appear to be familiar with the case of Nakoula Basseley Nakoula. For readers who are not, Nakoula was the man who produced the anti-Islamic video you referenced earlier that supposedly incited the “spontaneous mob” that led to the deaths of four Americans in Benghazi, Libya. Nakoula was publicly blamed for the Benghazi attacks by President Obama, U.N. Ambassador Susan Rice and Secretary of State Hillary Clinton.

As a result, Nakoula was arrested, jailed and became collateral damage in the tragic Benghazi saga. His life is still in ruins. Therefore, with the Clintons (and Obama administration) wanting to deflect attention from the content of the Podesta’s hacked emails to Russian intervention – what are the chances you could become the next Nakoula?

Stone: If Chairman Trey Gowdy’s Benghazi hearings determined nothing else, we know now that the entire fairytale and subsequent lies regarding this video were manufactured by Sidney Blumenthal. This is the same Blumenthal whose previous attacks on Obama were so vile that the president would not permit him to go on Hillary Clinton’s State Department payroll. Hillary, of course, clung to this false video talking point even after she was advised by the highest level of our intelligence services that the assertion was false. She would even look in the eyes of the parents of the four dead Americans killed at Benghazi and repeat this canard, which she knew was a lie.

I have no intention of being the scapegoat in this campaign. I am a partisan and a vocal supporter of Donald Trump. I am not running his campaign. But, because of that, I have been subjected to a systematic campaign of harassment including the hacking of my own email and a torrent of Net-based abuse and falsehoods perpetrated against me by Clinton hit man David Brock of whom Nazi propagandist Josef Goebbels would be proud.

For the record, I have been under constant surveillance. Two of my dogs have been poisoned, and someone regularly rummages through my trash where they will find nothing, since I wasn’t born yesterday.

We all know that politics is a blood sport, and I am no stranger to fights or controversy. I’ve been called every name in the book, but calling me a traitor, given my lifelong anti-communism and opposition to totalitarianism in any form, crosses a line.

Adams: Roger, having co-authored the book, “The Clintons’ War on Women,” you know firsthand how the Clintons wage war against their enemies. This week a Politico piece mentioned that Hillary “reviles” you, and since you are already at the top of her “enemies list,” what are your plans to defend yourself against the FBI and the CIA, now and later if the Clintons win the White House?

Stone: I fully expect to be harassed if Hillary Clinton should manage to win the election. All the public issues about the Clintons that are being raised for the first time will not go away, and I have no intention of ending the fight to expose their epic corruption, ruthlessness and lies.

Therefore, if in the near future you hear that I was depressed and took my life, got hit by a truck crossing the street, or killed in a freak hunting accident, you will know that I was murdered and that Hillary Clinton is the chief perp.

This article first appeared at wnd.com