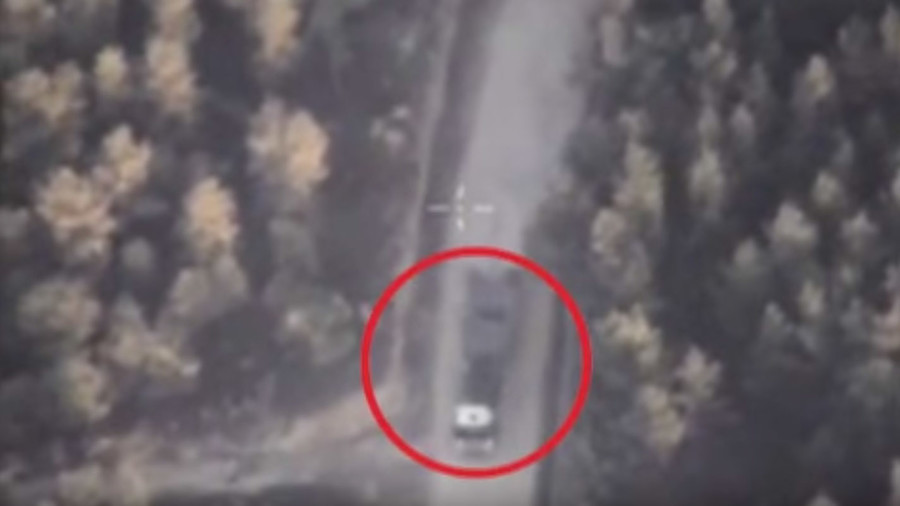 The Russian Ministry of Defense has released a video showing Islamic State (IS, formerly ISIS/ISIL) militants moving their military hardware to residential areas, including one near a mosque, in an apparent attempt to save it from airstrikes.

The video released on Tuesday was taken from a drone in Syria.

“Having realized the high efficiency of our reconnaissance assets in detecting masked equipment storage bases and the real threat of their destruction, terrorists are making efforts to move their weapons in residential areas. Vehicles are usually deployed near mosques as the terrorists know that the Russian Air Force will never target them,” the Ministry of Defense commented on the issued video.

Islamic State militants are hiding in mosques and using locals as human shields because they know that Russian jets would never target civilian areas, the Russian Defense Ministry revealed at two briefings on Tuesday.

“Knowing our careful, respectful attitude to mosques they understand that we would never – under any circumstances – carry out airstrikes against civilian facilities,” he said, following a meeting with Defense press attachés from several countries, with a US representative among them.

Later in the day, Igor Konashenkov, spokesman for the Russian Defense Ministry, also warned that terrorists may be preparing provocations such as bombing mosques to accuse the Russian Air Force of committing war crimes.

“As this example clearly shows, ‘moderate rebels’ would not hide behind civilians as human shields or, moreover, concentrate armored vehicles under the arches of religious institutions. All of these actions can only be the calling card of terrorists,” the Ministry of Defense commented on the issued video.

Anatoly Antonov also emphasized that Russia uses data from space and air surveillance – not only information gathered from the Syrian Army.

“We check the data a hundred times. Our decisions are well balanced, deliberate and calculated. We carry out airstrikes only if we are 100 percent sure that we are hitting the right target,” Antonov said.

He also expressed his regret about the media reaction to the Russian military operation in Syria as well as about the statements of US Secretary Defense Ashton Carter (about the necessity to resist Russian actions in Syria).

“That is a real information war,” he remarked.

Antonov also revealed that the Russian Defense Ministry and the Pentagon are working on a document concerning coordination of air operations in Syria.

“Unfortunately, the US is reducing our coordination only to its technical aspects – that is between our pilots during their missions,” Antonov said, adding that the General Staff in principle supports the agreement.

The Deputy Defense Minister believes that the potential of the Russian-US cooperation on Syria is much wider but said that Russia does not impose itself as a partner to solve the common problem.

He also said that on October 1, a video conference between the US and Russian defense ministries took place. A second one is planned for the next few days.

“But it would be better if our colleagues came to us and we discussed all the problems eye to eye here, at the Defense Ministry headquarters,” Antonov added.

Russia would welcome a Turkish Defense Ministry delegation to avoid further misunderstandings during the Russian military operation in Syria, Antonov said, referring to the accidental intrusion of a Russian aircraft into Turkish airspace.