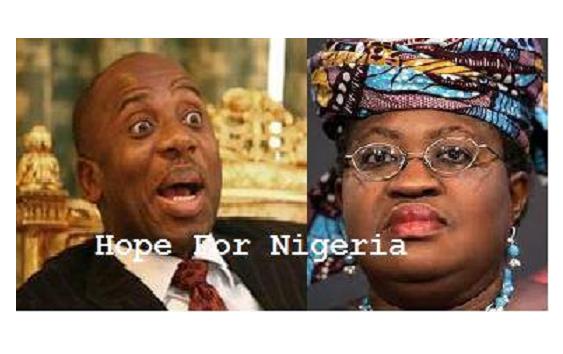 NewsRescue– The Nigeria Governors Forum led by Rivers State Governor Chibike Amaechi have requested Finance Minister and Coordinating Minister of the economy Dr. Ngozi Okonjo-Iweala to be sack or resign on her own will.

Amaechi’s group accused her of non-compliance with the revenue projection of the 2013 budget was a direct breach of the Appropriation Act.

FINANCE MINISTERS OFFENSES.
1] Dr Okonji Iweala was accused of starving contractors by not releasing all the contract fund to them, as at the time the projects are approved. On the contrary, the Finance only pay contractor in respect to the percentage of contract finished to avoid the project been abandoned, as have always been the case.
This method of payments to contractors makes it difficult for contractors to pay the politicians or their contract facilitators their 10% and 20% kick backs until the job is completed.

2] The Finance Minister is starving the state governor of Funds, by ensuring that Nigeria should grow their foreign reserve, which stands at $48billion in August, 2013 against $28.7B in late 2010. The Governors demands that this reserves should be shared for them to provide dividend of democracy to their people. The Excess crude reserve is already depleted under duress by the governors through their treats of court action against the federal government.

3] The Finance Minister and the President are accused of been so tight-handed with Money. There is no more Ghana-must-go changing hands, especially as means of settling conflict with the Presidency as was the case in previous regimes. Trouble shooters are frustrated as the traditional kick back and fronts are not forth coming.

Dr Okonji-Iweala ensured that every revenue and expenditure of the government is published online, making it slightly difficult to squeeze out some funds to settle ‘rebel’, those threatening impeachment and sack.
The best option is listing the sacking of the Finance Minister, as a new condition to President Jonathan by the rebel Governors for peace to rain in PDP and in the country. – Hope For Nigeria.