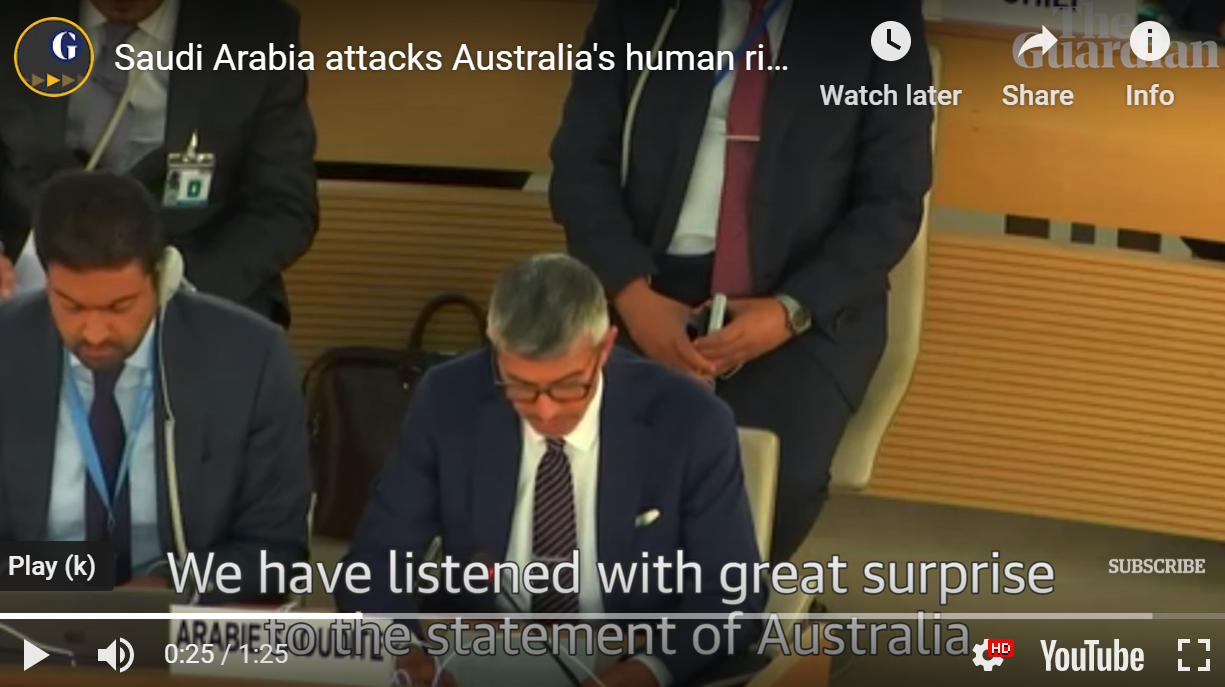 By the law of unintended consequences, US President Donald J. Trump’s mix of uncritical and cynical embrace of Saudi Arabia and transactional approach towards relations with the kingdom may be producing results.

Saudi Arabia appears to be backing away from its largely disastrous assertive and robust go-it alone foreign and defense policy posture and reverting to a more cautious approach that embraces multilateralism, seeks international backing before acting and emphasizes traditional and public diplomacy.

The kingdom’s shift towards a less reckless, more coordinated and deliberate foreign and defense policy does not necessarily mean a change in rhetoric or a greater willingness to seek negotiated solutions.

It entails a change in tone and strategy rather than a backing away from key foreign or domestic policy positions, including Saudi Arabia’s deep-seated animosity towards Iran.

Saudi state minister for foreign affairs Adel al-Jubeir made that clear, saying that Saudi Arabia had not ruled out a military response to drone and missile attacks that severely damaged two if its key oil installations.

Mr. Al-Jubeir reiterated conditions for any successful negotiation that include tough restrictions on and oversight of Iran’s nuclear program and limits to its development of ballistic missile. He further demanded fundamental changes to Iran’s foreign and defense policy.

“No nukes, no missiles and no terrorism,” Mr. Al-Jubeir said in language that was likely to appeal to a broad audience but masked the two countries’ core differences.

Nicolas Dunais, an economic advisor to Gulf governments who last year was helping Saudi Arabia establish a national risk and resilience unit, got a glimpse of Saudi Arabia’s fundamental attitude before the kingdom’s recent repackaging.

Mr. Dunais was taken aback when he suggested opening a backchannel to Yemen’s Iranian-backed Houthi rebels.

“Not only was the suggestion ignored, but it also led to questions as to my motivations and interests—as if trying to solve a national risk through dialogue was anathema, given the confidence that military might alone would be enough to crush an army of ragtag rebels fighting with AK47s,” Mr. Dunais recalls.

King Salman signalled the policy shift when he told a Cabinet meeting, days after the attacks believed to have at least been enabled by Iran, that they were “not aimed at the vital facilities of Saudi Arabia only, but also threaten the global economy.”

King Salman’s statement was as much an effort to capitalize on the attacks to garner international support and step up pressure on Iran as it was the setting of a different foreign policy tone.

Similarly, in sharp contrast to the kingdom’s rejection of an international investigation into last year’s killing of journalist Jamal Khashoggi and its tight control of access to war-torn Yemen, Saudi Arabia followed up on King Salman’s statement by inviting the United Nations and others to participate in a forensic investigation of the attacks that would focus on the origin of the weapons employed, and the launching spot of the drones and missiles.

Speaking to the New York-based Council of Foreign Relations, Mr. Al-Jubeir said foreign experts had already arrived in the kingdom.

Driving the point home, Mr. Al al-Jubeir said earlier that Saudi Arabia was consulting “with friends and allies about the next steps to take.”

In a further embrace of multilateralism, Saudi Arabia, days after the attacks, joined a US-led coalition to secure the Middle East’s waterways. Earlier, Britain, Bahrain and Australia pledged to participate in the coalition.

The Saudi moves were buffeted by a concerted reaching out to the media rather than relying primarily on expensive public relations and lobbying agencies to ensure that the kingdom’s voice and more cautious approach was heard and noted.

The attacks drove home the vulnerability of the kingdom’s oil assets that account for the bulk of its revenues and its international standing and a realization that Saudi Arabia could not count on unquestioned support of the international community and particularly the United States, its long-standing guardian angel.

That realization came as Saudi Arabia was working to repair damage to its image as a result of its conduct of the Yemen war; the killing of Mr. Khashoggi; the massive crackdown on activists, critics and businessmen; and its abrupt and undiplomatic response to countries like Sweden and Canada that voiced public criticism of the kingdom’s policies.

This week, Saudi ambassador to the UN Abdulaziz Alwasil didn’t mince his words, responding to Australia’s leadership of 24 Western nations in issuing a statement condemning the kingdom for a raft of human rights abuses.

Yet, in a sign of the times and in contrast to earlier incidents involving Sweden and Canada, Mr. Alwasil did not threaten disruption of trade and other forms of cooperation with Australia nor did he indicate that the kingdom may expel Australian diplomats.

Saudi Arabia’s efforts to come to grips with new realities came as the kingdom was preparing for an initial public offering by its national oil company, Aramco, that has been struggling to ensure that it meets Crown Prince Mohammed bin Salman’s target valuation of US$2 trillion.

The precarity of the kingdom’s situation was obvious for all to see when Mr. Trump made clear that his inclination was not to launch a risky retaliatory strike against Iran in response to the attacks but to tighten economic sanctions and to continue exploring a possible dialogue with the Islamic republic,

Adding insult to injury, Mr. Trump emphasized the fact that the attacks were against Saudi Arabia and not against the United States and that his administration would support a Saudi response or potentially act on its behalf against payment.

As a result, Saudi Arabia has been manoeuvring to ensure that the situation does not get out of control and that it is not put in a position in which it risks an all-out war that could prove to be devastating.

Saudi Arabia’s shift in policy approach follows in the footsteps of the United Arab Emirates that has in recent months sought to de-escalate tensions in the Gulf by distancing itself from Saudi positions.

The UAE has partially withdrawn its forces from Yemen in an effort to prevent further reputational damage, a move that sparked fighting between UAE and Saudi-backed forces in the country. It was careful not to blame Iran for attacks on tankers off the coast of the UAE believed to have been launched by Iran and reached out to the Islamic republic by sending a coast guard delegation to Tehran.

Said Rebecca Wasser, a senior policy analyst at RAND Corp., noting that the attacks had made the kingdom realize that it may be playing for stakes that are too high: “I think there has a been a calculation that the costs might be too high.”

Mr. Trump can claim some credit for Saudi Arabia’s emerging adoption of a more cautious approach. Higher costs and greater risk perceptions were likely one consequence of his transactional approach towards the kingdom.