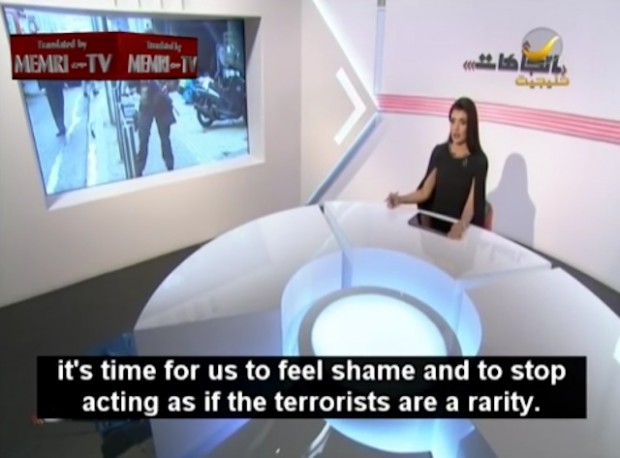 In a monologue a popular Saudi Arabian television host, Nadine Al-Budair decided to get “real” and call out Muslim hypocrisy and denial of their overwhelming involvement in suicide bombing and radical terror around the world today.

“It’s time for us to feel shame and to stop acting as if the terrorists are a rarity,” she said.

MEMRI reported that Nadine Al-Budair made her remarks on Saudi Arabia’s Rotana Khalijiyah TV on the third of April.

Nadine went on to say:

“After the abominable Brussels bombings, it’s time for us to feel shame and to stop acting as if the terrorists are a rarity,” she said, according to a translation from the Middle East Media Research Institute.

“We must admit that they are present everywhere, that their nationality is Arab, and that they adhere to the religion of Islam,” Al-Budair said as she pointed her finger at an education system that enforces memorization of hardline Salafist texts and where schools and universities “told them the others are infidels.”

“Whenever terrorism massacres peaceful civilians, the smart alecs and the hypocrites vie with one another in saying that these people do not represent Islam or the Muslims. Perhaps one of them could tell us who does represent Islam and the Muslims,” she said.

Nadine said that Arabs tried to deny and pretend that “everything that is happening has nothing to do with the Muslims, and that the terrorists are highway robbers and homeless alcoholics and drug addicts.”

“We all know that the number of the homeless in Europe is very high. They sleep in the streets and beg for alms, and some of them are alcoholics or drug addicts, but we do not expect these addicts or criminals to even consider coming here and blowing up a mosque or a street in our city. It is we who blow ourselves up. It is we who blow up others,” she said.

“Why do we shed our own conscience?” she asked. “Don’t these perpetrators emerge from our environment? Don’t their families belong to our society? Didn’t anyone you know — someone from your city, a neighbor, someone from your street, a relative, a nephew, a grandson, a father, or a mother — go to Syria or Iraq to wage jihad?”