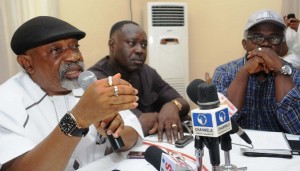 Senator Chris Ngige, representing Anambra Central Senatorial zone has described the construction of the second Niger Bridge by the federal government as a huge fraud meant to rip off the people of the South-East.

Ngige, who spoke during the inauguration of the Anambra State executives of the All Progressives Congress, (APC), said that he deliberately stayed away from the ground breaking ceremony of the bridge months ago for three reasons.

“The first is that the bridge is being built on a Public Private Partnership(PPP) deal, with overseas financiers. For that reason, the cost of the bridge suffered double inflation, both from the Nigeria end and the financiers who alleged cost of fund.

“The bridge, which should have cost N70 billion is now to cost N114 billion, that was why I told the South-East Senate Caucus that I was not going to be a part of it. As a governor in this state, I resisted that arrangement from Mr Obasanjo.

“In the budget, we have similar bridges and same length built for free by the federal government. Why should that built for the South-East be toll gated? That bridge will have two toll gates, one in the Asaba end and one in the Onitsha end. Before you pass through it and come back, you would have spent N1,000, that is injustice. We will continue to fight to ensure that the bridge is not toll gated”, Ngige said.

Ngige said similar bridges across the country had been funded by the federal government, and wondered why that of the South-East should involve a PPP that would keep the people in bondage for full 25 years.

Speaking on the attempted assassination on General Buhari on Wednesday, Ngige said it was a vindication of the APC, after the PDP accused it of being the sponsors of Boko Haram.

He said the bomb was targeted at Buhari, but that lucky enough, God saved him.

“So will they now say that Buhari bombed his own convoy? Then I ask, do you show that you are a brave man by taking a knife and cutting yourself? They just wanted to kill him, but good a thing his car, which is a bullet proof car was not touched, but then, that is bullet proof and not bomb proof”.

Ngige stated that APC is still on course, with the aim of taking over and rebuilding Nigeria.

He said that the attack on Buhari had shown that APC or Buhari as a person has no hand in what is happening in the country.

He told members of the party that APC is very concerned about the troubles in the country, and has directed all its governors to give their cooperation to the federal government to ensure that Nigeria overcomes terrorism.

“Terrorism is not something you play politics with. If I tell you the truth, Our governors in the North-East, where Boko Haram has taken roots are spending their private funds on security to see how they can beat the condition there, and here someone is accusing them of complicity. If APC is responsible for the terrorism, it would have taken it to PDP governed states”.

Speaking on his matter at the Appeal Court, Enugu, Ngige expressed hope that today’s (Saturday) judgment will be in his favour, but adding quickly that, “if they decide to do mago mago, then we are sure the whole thing will end in the Supreme Court”.