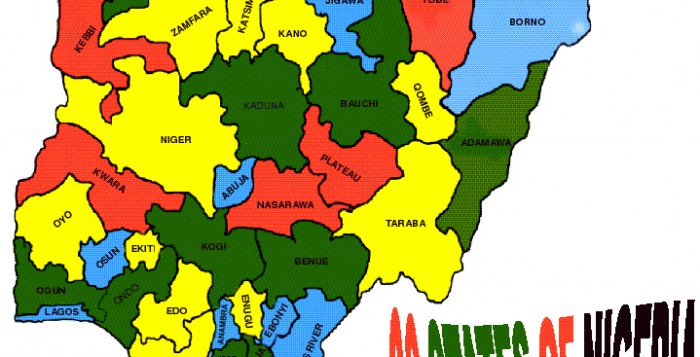 Details of the 19 new states proposed by the ongoing National Conference t be created in addition to the 36 already in existence have been identified.

This was contained in the documents obtained Saturday.

For the proposed Edu State, which will be created out of the present Niger State, it will be made up of Agagie, Bida North, Edati, Agbakoba, Katcha, Lapai, Labun and Mokwa Local Governments with its capital in Bida.

Apa State will be carved out of the present Benue State and made up of Agatu, Apa, Otukpo, Oju, Obi, Obi, Ohimini, Okpokwu and Ofbadigbo Local Government Areas with capital in Otukpo.

If Kainji State is created, it will be created from the present Kebbi and Niger states and it will be made up of Danko/Wasagu, Fakai, Zuru, Shanga, Sakaba, Nhaski, Yauri, Rijau, Mariga, Magama, Kontagora, Agwara, Borgo and Mashefu Local Governments. Its capital is proposed to be in Zuru.

For the proposed Katagun State, which is recommended to be created out of Bauchi State, it will be made up of Gamasa, Dam-an, Misau, Giade, Shira, Jama’re, Itas/Gadau, Zaki with the capital in Azare.

If Savanna State is created as recommended, it will be from the present Borno State and it will be made up of Gwoza, Chibok, Askira/Uba, Biu, Hawul, Shani, Kwaya-Kusar, Bayo and Damboa Local Governments with its capital in Biu.

If Ghari is created from Kano State, it will be made up of the following local governments:Bagwai, Bixhi, Dawakin Tofa, Dambatta, Gwarzo, Kabo, Kunchi, Makoda, Rimin Gado, Shanono, Tofa and Tsanyawa. Its capital has not been decided.

The proposed Aba State will have its capital in Aba town, which is part of the present Abia State. It is expected to be made up of Isiala, Isiala Ngwa South, Obingwa, Aba South, Ugwunagbo, Aba North, Ukwa West, Ukwa East and Osisioma Ngwa Local Governments.

Adada State, which is expected to be created from the present Enugu State, will have its capital in Nsukka. It will consist of Igbo-Etiti, Igbo-Eze North, Igbo-Eze South, Isibor-Uzochukwu, Nsukka, Udenu and Uzo-Uwani.

Njaba/Anim State is recommended to be created from Imo and Anambra states with the capital in Orlu. Local governments expected to be under it are Orlu, Orau, Oru East, Oru West, Ohaji/Egbema, Ogut! Njaba, Isu, Nwangele, Mkwere, Ideato Nirth, Ideato South and Ihiala.

The New Oyo State has no capital yet, but local governments that are expected to be part of it from the present Oyo State are Irepo, Olorunsogo, Oorelope, Saki East, Saki West, Atisbo, Itesiwaju, Iwajowa, Kajola, Iseyin, Afijio, Oyo East, Atiba, Ogoja Oluwa, Surulere, Ogbomosho North, Ogbomosho South and Orire.

The proposed Ijebu State from the present Ogun State will have its capital in Ijebu-Ode, and made up of such Local Government Areas like Ijebu-Ode, Ijebu-North East, Ogun Waterside, Odogbolu, Ijebu East, Shagamu, Ikenne and Remo North.

Ogoja State, which is expected to be carved out of the present Cross River State, will have its capital in Ogoja. It will be made up of Bekwarra, Bokki, Etung, Ikom, Obanliku, Obubra, Obudu, Ogoja and Yala Local Government Areas.

The expected Anioma State to be created from Delta State will also have its capital in Asaba, if the proposal scales through. Local Government areas expected to be under it are Aniocha North, Aniocha South, Ika North-East, Ika South, Ndokwa East, Ndokwa West, Oshimili North, Oshimili South and Ukwaani.