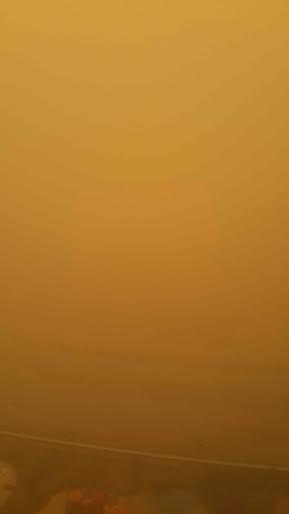 Dust and sand storms led to low visibility across the UAE on Thursday morning, resulting in more than 100 accidents being reported in Dubai between 6am and noon.

A total of 135 accidents were reported on internal roads including Emirates Road, Mohammed bin Zayed Road and Sheikh Zayed Road, police said, while more than 1,600 calls were made to the emergency services.

The National Centre of Meteorology and Seismology warned motorists about the poor driving conditions, with visibility down to less than 500 metres in some areas.

Abu Dhabi and Dubai Police urged motorists to drive with caution, with the latter reminding drivers to keep their car lights on and leave a safe distance between other cars.

Abu Dhabi Police said a 24-year-old woman was flown to hospital after being injured in a crash on the Dubai-Al Ain Road at 6am.

“I urge motorists to reduce their speed, maintain enough space between vehicles, and check for any debris on the road to avoid accidents,” said Lt Col Jamal Al Ameri, head of public relations at the Traffic and Patrols Directorate.

“Drivers are also advised against parking near buildings which are under construction.”

Later on in the morning, motorists in Dubai reported that visibility had further decreased in Jebel Ali, to around 100m.

The western region, including Al Ghuwaifat and Al Silaa, was one of the first areas affected by the sandstorm.

People heading offshore should also take care, with the weather bureau warning of strong winds and rough seas around the Arabian Gulf and moderately disturbed seas in the Sea of Oman.

The cloudy and dusty weather is set to continue over the weekend, especially over rural areas.

The conditions prompted health warnings from the National Emergency and Crisis Disaster Management Authority, which advised adults and children with asthma or allergies to stay indoors.

“Normal operations have been disrupted at DXB & DWC [Dubai World Central] due to bad weather across GCC. Check with your airline for updates. At Dubai, four incoming flights were diverted to neighbouring airports.

“Passengers can also check http://www.dubaiairports.ae for arrival and departure times and for updates/advisory. Meanwhile, Dubai Airports is working with all airlines and other stakeholders to minimise inconvenience to passengers.”

“Abu Dhabi Airports are in continuous communication with Etihad Airways, other operating airlines, companies working at the airports and nearby airports, to ensure effective readiness to any update,” said Ahmad Al Haddabi, Chief Operations Officer at Abu Dhabi Airports.

“We are also working in coordination with the Sheikh Zayed Air Navigation Centre and the government entities at the airport to ensure passenger safety and convenience.”