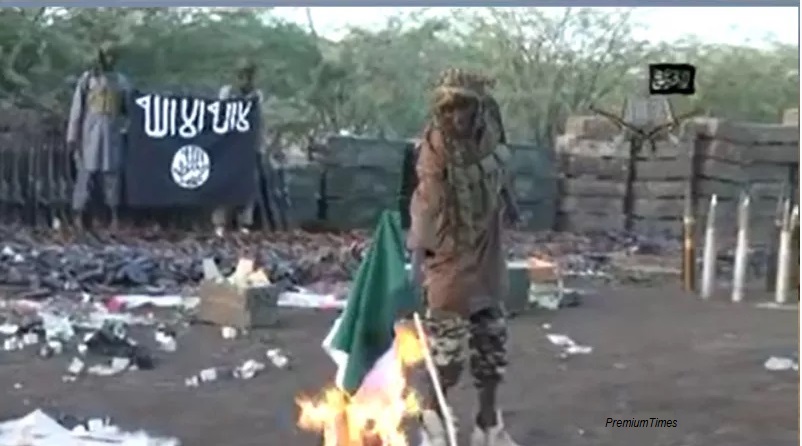 We exclusively first reported about the massive amount of weapons including the best communications equipment that Boko Haram got in the raid of the under-armed and sparsely defended Baga barracks. See: NewsRescue–BagaHolocaust: Boko Haram Captured The Best Communications Equipment In N’East, APCs, Tanks – Dr Peregrino Brimah Says

Boko Haram leader, “Abubakar Shekau” in this new video thanked the Jonathan government for the weapons it received in that easy raid in which it massacred over 2500 Nigerians (in predominantly Muslim northern village of Baga) and while calling the Jonathan government and Nigerian army under Air Marshal Alex Badeh “cowards” and “liars” for claiming that Nigeria lacked arms for the war against them, “Shekau” promised that Boko Haram now had a large enough arsenal to destroy Nigeria in the ongoing pogrom of the northeast of the oil-rich nation.

The full translation of his speech by PremiumTimes reads:

“We thank God for making us enter Baga and Doro-Baga in victory. We have today declared Baga as part of our territory and one of our operational base”.

“Jonathan you are in trouble. All governors of Nigeria are in trouble. All these war equipment that you see being displayed in the screen are gotten from Baga and Doro. Your army kept deceiving the world that you can’t fight us because you have no arms. Liars! You have all that it takes; you are just coward soldiers. You forgot that it is God that arms. Is it not amazing that we, who started with sticks and machetes, are today the biggest headache to the almighty Nigerian soldiers? What a shame!!

“Jonathan is it not shameful that now even your supporters are insulting and causing you? This should be a sermon to the world that you should not trust in humans. Any one that trusts a man will end up regretting. This is just the beginning of the killings; what you’ve just witnessed is a tip of the iceberg; more deaths are coming. This will mark the end of politics and democracy in Nigeria. This is to confirm to you that we carried out the Baga massacre, and we are going to do more.

“Nigerians are busy with politics, hailing Buhari! Buhari, Jonathan! Jonathan! Do you think the two of them are spared? Do you think even Buhari is a good Muslim? Buhari is not a Muslim as far as we are concerned – He is nothing but an infidel and our enemy.

“Muhammed Yusuf, the president of Niger, so you too have the temerity of coming out to pay sympathy visit to the Francois Holland the President of France. Is this your true character? Muhammed Yusuf, you have amazed us. You shall soon see our wrath, very soon.

“And you, Paul Biya, the president of Cameroon. Now you are asking for foreign assistance; please don’t waste your time because God is more than all the help you will get.

“And even you Idris Debby, you are not spared. You guys have acted too late, very late.

“Before I end my speech; I want to react to a radio broadcast from France where the French said they are enemies of Islam and the prophet of Islam. I am going to read the France statement (he tried reading a French statement) In that broadcast the French government and people after insulting the holy prophet of Islam said a war against terrorisms is the same as fighting muslims.

“After this I will be setting ablaze the Nigerian flag just like we always do in all the places that we have conquered. It is a useless flag and its relevance would soon be a thing of the past. We are now showing the world all the arms and ammunition that we got from the Nigeria army barracks in Baga, Doron-Baga, Mile-4 and this barrack. What we have in our armoury now, plus all that we had before is enough to execute a victorious war against the whole Nigeria.

Shekau was later shown in the video setting a Nigerian flag on fire, and hoisting a Boko Haram flag. He then lifted a black flag with Arabic inscription as he recited an altered version of the first few lines of the Nigeria National Anthem, speaking in English:

“I pledge to Allah, my God. To be Faithful Loyal and Honest. To serve Allah with all my strength. To defend his Islam… Allahu Akbar!! Nigeria is dead; her constitution is dead!! Islam and Islam; war by war upon the Kafir who is the unbeliever”.

The concluding parts of the video showed a footage of some Boko Haram members setting flags of Nigeria on fire as one of them was heard saying; “and say the truth has come and falsehood has disappeared; verily falsehoods are bound to disappear”.

One of the Boko Haram members who was dressed in a kaftan with a belt on his waste and a turban around his head conducted the camera around a large a cache of arms and ammunitions, as he gave details on each weapon and how they were obtained.

Related: #BagaHolocaust: What The Global Media Is Not Telling You [VIDEO]

2000 and counting, innocent Nigerians were gunned down in Baga, Borno state in the first few days of January 2015. The global media is hardly giving this monstrous atrocity any coverage. The Nigerian and world leaders are not commenting on it either. A deadly conspiracy against the populace of Nigeria, particularly north Nigeria cannot be dismissed.

In this video, Dr. Peregrino Brimah of ENDS, Every Nigerian Do Something, carefully lines up the facts surrounding the globally permitted genocide in Nigeria and draws up a picture of a francophone and global network in tandem with Nigeria’s current leadership.

Dr. Brimah suggests that things are only going to get worse as Boko Haram in this latest attack were able to obtain most sophisticated communication equipment,in the north from the Baga multinational forces military base. The communication equipment is more superior than the equipment at the army Division 7 heading operations in the north. Also the terrorists captured armored personnel carriers and tanks with which they will commit more grievous atrocities on the people of Nigeria’s north.