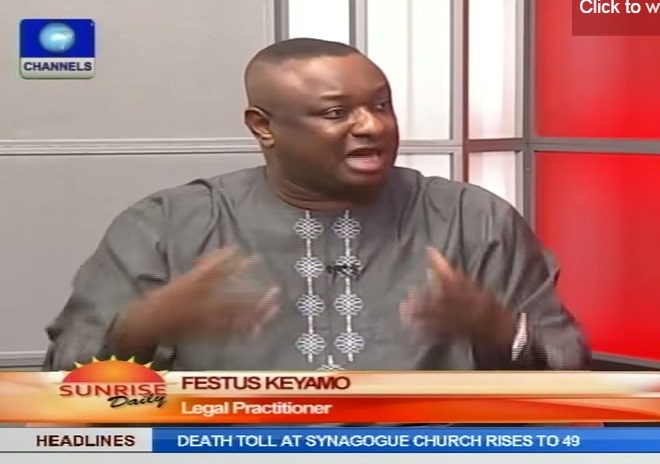 A Lagos based Television station, Silverbird TV, has attributed Wednesday’s abrupt end of their breakfast programme, Today on STV, on “technical hitches.”

Mr. Keyamo, who was speaking about the forthcoming elections and the ‘State of the Nation, had turned on President Jonathan, blaming him for Nigeria’s insecurity woes among other things and hinting that a Muhammadu Buhari would have done better in his position.

Mr. Buhari, a retired army General, is the candidate of the All Progressives Congress, APC, and President Jonathan’s major challenger at the February 14th election.

Uzonna Ononye, the Head of News at the TV station, told PREMIUM TIMES that the problem was “technical”.

A staff of the station who also spoke to PREMIUM TIMES said that the station had been having technical issues before Wednesday’s programme.

“It (technical hitch) has happened before, although you can’t rule anything out.”

Mr. Keyamo had accused the military chiefs of feeding fat on the insurgency and asked the president to resign for failing to deal with the Boko Haram terrorists.

Some viewers of the programme had attributed the station’s “shutdown” to Mr. Keyamo’s harsh criticism of President Jonathan, a close friend of Ben Bruce, the owner of the TV station and a Peoples’ Democratic Party, PDP, Senatorial candidate in Bayelsa State.

But Mr. Keyamo, who spoke with PREMIUM TIMES immediately after the incident, said that the programme’s organizers told him it was merely a “technical error.”

“The mass media is part of the problem because they are clearly taking sides,” Mr. Keyamo said over the phone.