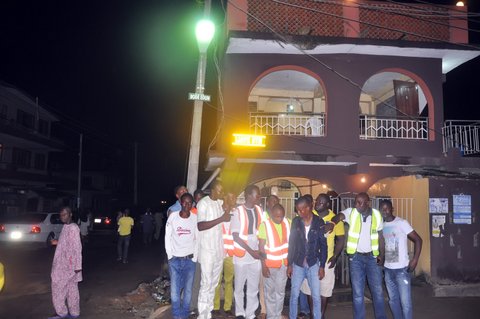 The foundation with support from its sponsors and partners, installed 100 street lights in the inner streets of the seven wards of Oshodi Isolo Local Government Area.

Speaking during the commencement of the project, the founder Mr. Bode Edun said the foundation took it upon itself to help light-up the nook and crannies of Oshodi to help citizens at night.

“The importance of street lighting cannot be overemphasized’ Mr. Bode told journalists who were present at the first installation.

“It is on record that the provisions of street lights by the Lagos state government have helped curb the tide of armed and small robberies in Lagos.

“We are simply contributing our own quota as an non profit organisation to the development of Oshodi/Isolo local government area” a smiling Edun said.

The residence and elders of Simbi Street, Ijaye Street, Edun Street, Brown Street and other adjourning street where the installation has been completed expressed joy over the project.

The Chief Imam of Ijaye Mosque Alhaji Imam Wasiu Atonda, stated that “as a son of the soil, our son (Bode) recognizes our need in the area and always rise up to the occasion to help solve our problems, so I am not surprise his foundation is coming up with this project”.

The foundation promised to do more to alleviate the suffering of residents in Oshodi Isolo.

Bode Edun Foundation (BEF) is a socioeconomic development foundation with its headquarters in Lagos, Nigeria.

The foundation with 500 volunteers, has embarked on several projects in its few months of existence in and around Oshodi area to achieve sustainability and moderate urban development.

Founded by Bode Edun, a passionate Nigerian with vast experience in the banking sector. BEF desires to see a transformed society.

Read more about the foundation at www.bodeedunfoundation.com