We conducted a post-election survey to determine the prevailing determinants in the recently concluded March 28th presidential elections.

The poll was distributed through several online fora including ProudNigerian.com; NewsRescue.com, ENDS.ng and through emails and facebook account sharing.

Respondents were asked to answer the following questions:

1.Did you vote in the March 28th Presidential elections? 2. If no, why did you not vote? 3. Who did you vote for? 4. What state are you from? 5. What is your ethnicity? 6. What influenced your vote the most? 7. What is your religion? 8. Do you have any other comments, questions, or concerns?

84%, 589 voted in the elections. Many of those who did not vote cited “no voters card” and being out of the country as the major reasons for not voting in 116 text responses. 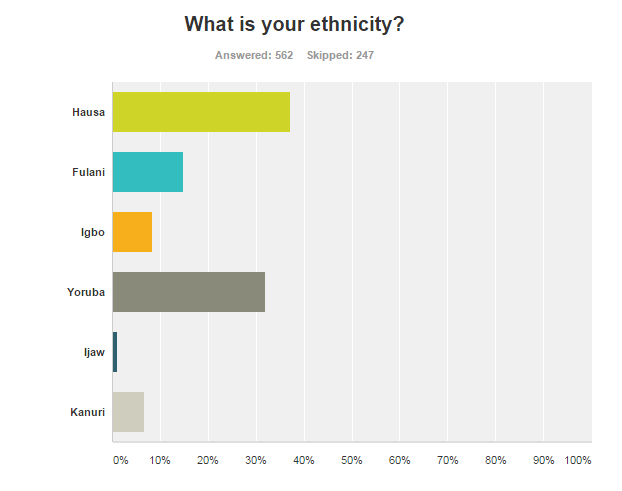 Development was the greatest influence on voting choice with 269 selections; next was Progress with 225; Economy: 203; Unity 145; Terror 101. Least were Religion and Ethnicity with 24 and 13 votes respectively.

Of the particular ethnicities of interest in this snippet, of those who identified as Igbos, out of 47 respondents, 16 voted for the incumbent while 22 reported voting for the winner, Muhammadu Buhari. This number was in disparity with the results from the polls which some have alleged were rigged.

40 Igbos identified as being Christians and 3 as Muslims.

The factors that influenced the Igbo votes for Goodlcuk Jonathan were: Development 8, Economy 4, Ethnicity 3, Religion 2, Progress 3 and Education 1.

Of the Hausa voters, the results were almost completely homogenous. Only 4 of 209 voters voted for Goodluck Jonathan. 1 voted for Martins Onovo. All the rest who voted did so for Muhammadu Buhari. 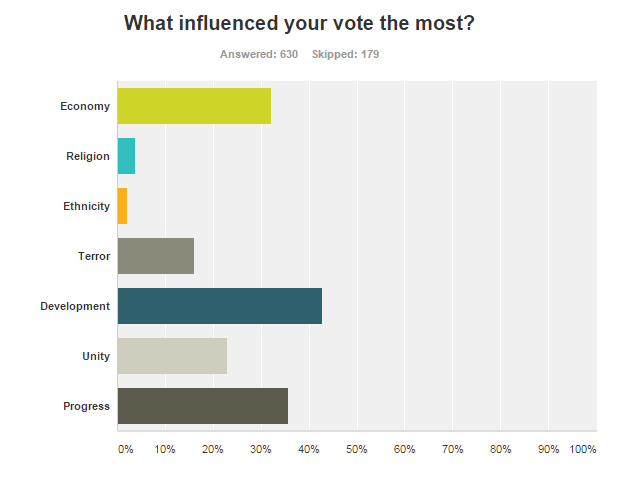 Of the 209, only 6 voted based on Religion and 3 based on Ethnicity, the rest voted mainly for Development, Progress, Unity, Economy and Terror.

From the results, there was a 2.5 times greater odds of voting based on religion and ethnicity among the Igbos when compared to the Hausas.

Of the Yorubas 15 voted for Goodluck Jonathan and 134 reported voting for Muhammadu Buhari. The pattern was similar.

All but one Fulani who voted for Chekwas Okorie, voted for winner Muhammadu Buhari. The reasons for voting were similar: Development, Unity, Progress, Economy, Terror.

Of the 83 Fulani respondents, only 2 voted based on Ethnicity and 1 on Religion.

The Abstract has been submitted to RGuild.org and is in review.

For the full database please send your request to me or to [email protected]. We are happy to share the results in SPSS, Excel or other format for your analysis and research. IP addresses and full respondent details are included.