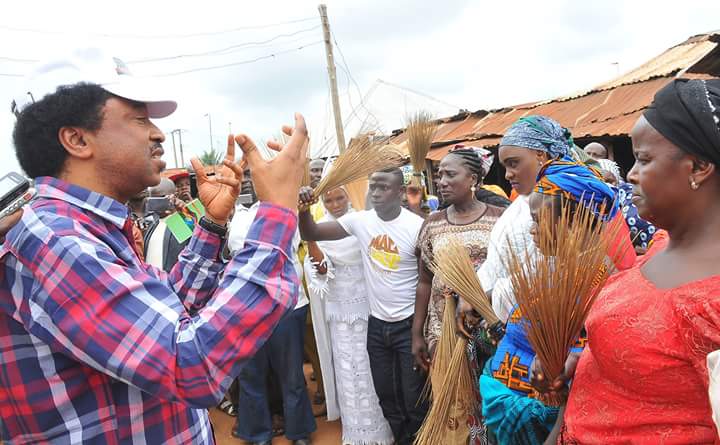 He stated this on Sunday during the launch of his interactive forum in Nasarawa, a suburb of Kaduna metropolis.

“We know that Nigerians are facing hunger, no money for school fees and no jobs,” the senator said while addressing the residents of the area during the event tagged “Street Parliament.”

A chieftain of the APC in Kano, Hussaini Mairiga, had recently said President Muhammadu Buhari who assumed power last year had failed because Nigerians were undergoing unprecedented hardship.

Mr. Sani, a member of the ruling All Progressives Congress, however blamed the hardship Nigerians are currently facing on the 16 years of Peoples Democratic Party’s rule.

The lawmaker, who received complaints from residents about the terrible condition of the road leading to the area, poverty, joblessness and lack of portable drinking water, regretted the neglect of the community by government, noting that “it is as if this community is not in Kaduna.”

He however assured the residents that the APC-controlled state government would redress the ugly situation.

“But it is not our ( APC) fault. For the past 16 years. The PDP government did not do anything to you, but this present government will do something for your community,” he said.

Mr. Sani also told residents of the area, most of who are former workers of the numerous textile companies in Kaduna that the federal government had earmarked N50 billion to revive the moribund textile industries.

He said during the administration of former President Goodluck Jonathan about N70 billion was given to some people he did not name to revive the textile industry but that they squandered the money.

According to him, the current federal administration had already earmarked N50 billion to revive the textile sector. He warned that caution should be taken on how the money would be disbursed so that it would not fall into the wrong hands.

“Now the government has promised to give N50 billion to revive the textile companies. The Governor of Central Bank was the one who said this,” he said.

“A meeting has been held with the textile companies. It is important to ensure that those who were working in the textile should be there when the funds are being released so that the money will not be diverted to other things.

“During the administration of former President Goodluck Jonathan, some people collected about N70 billion in the name of reviving the textiles.

“This time around, such mistake must not be repeated, so it is important that people in this community and Kakuri in general, should select representatives to the CBN and request to witness the disbursement of the funds for textile companies.”

Mr. Sani explained that the objectives of the “Street Parliament” was to provide a platform which he and his constituency could interact and share ideas that would bring about development.

He said, “I decided to come to Nasarawa community to launch what I called Street Parliament. I know that you are facing many problems in this community.

“Street Parliament is a new concept of bringing the government closer to the people. It is a concept of reaching out to people and giving the people a platform to talk to their elected representatives.

“Unlike in the past, when you see your elected representatives from a distance or on television screen, now I am introducing this forum to serve as a medium for interaction with you.

“The Street parliament is a new idea aimed at carrying the masses along in the process of law making. It is to afford the people express their feelings, ideas and those things you think should be a priority to those of us in the National Assembly.”