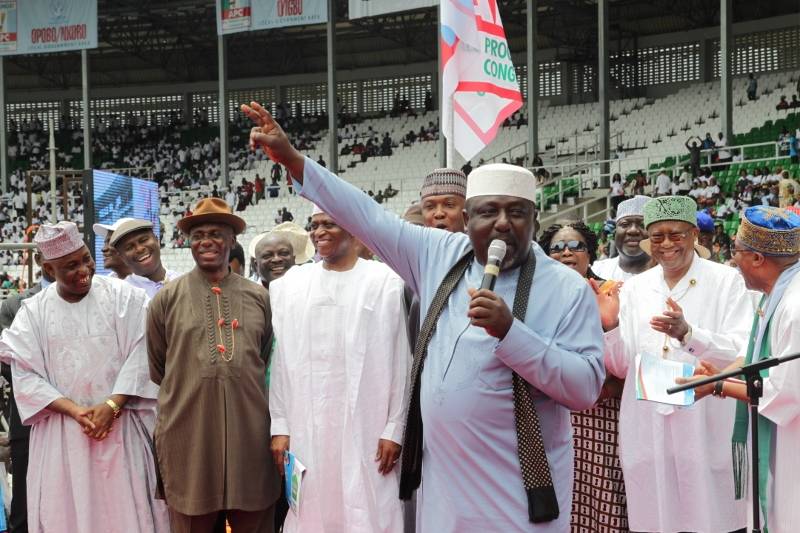 Chairman of All Progressives Congress, APC, Governors Forum, and governor of Imo State, Owelle Rochas Ojorocha said yesterday that seven Peoples Democratic Party, PDP, governors were secretly holding meetings and strategizing in favour of his party for the polls.

Okorocha, who spoke at APC campaign rally in Amuwo-Odofin Local Government Area of Lagos, did not, however, name the PDP governors involved.This came as national leader of the party, Asiwaju Bola Tinubu, said the federal government has allegedly diverted money meant to insure security men, especially those fighting insurgency in the North East.

According to him, the action of the PDP governors further indicates that the ruling party was afraid of the APC presidential candidate, General Muhammadu Buhari (retd.)

He said: “Buhari’s victory has been sealed and delivered and today, about seven governors who are not APC are coming to hold meeting with us privately. There is fear in the country and the fear was that they know that Buhari is a good man and he will win.

“They know that once the Independent National Electoral Commission, INEC announce Buhari as the winner of the presidential election, all the bad people who are embezzling the country’s fund will leave the country at night. The fear of Buhari is the beginning of stoppage of corruption.’’

He noted that after Buhari assumed office in 1983, he stopped open defecation before it became entrenched again and eradicated all forms of indiscipline.

Okorocha said the glory of the country would be restored because the change that gave rise to APC had started.