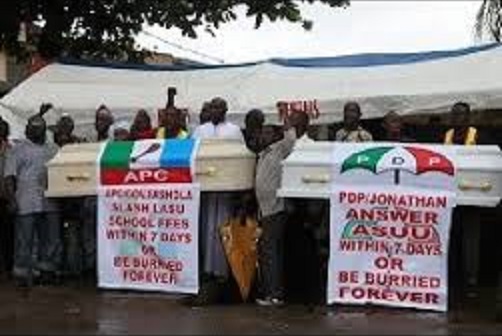 In Nigeria crime pays: study armed robbers, politicians and terrorists. PDP and APC are fighting over who owns more armed robbers. No need to fight, they both do. They both distribute rice to buy the dignity of the people; they both steal the people’s mandate by any mean necessary and subvert it; they both pay and arm robbers and finance and protect terrorists to intimidate, kill and bomb. Whoever does it a little more than the other is no concern of ours. Armed robbers, terrorists and politicians are the same socio-occupational class.

This explains our curse as a nation, when it is the worst and most filthy scum from among us; the only of us who know where armed robbers dwell and who rent robbers and terrorists that we allow to continue to rule over us. Indeed we are living a curse.

The EFCC (Economic Financial Crimes Commission) caught the current First lady/president’s wife, Patience Jonathan not once, but twice around 2006, while Jonathan was Bayelsa state governor. She was caught trying to launder over $13million stolen state funds out of the country.

The president of Nigeria is described by wikileaks as having been a well known sponsor of Niger Delta terrorists while he was deputy governor and governor of Bayelsa state. The strategic Abuja bombing upon assumption of office with the concept of ‘blame the opponents for success of terror,’ came as no surprise to many.

We can run through most of the politicians in Nigeria and state governors across all party lines we will see the same records. They all know the address of armed robbers and hire these people to defend and intimidate.

The worst evil the colonialist did to us in Africa was to leave us with this political demoncrazy abomination. I wonder if God can forgive them for what they have done to us – this rubbish that makes terrorist armed robbers our rulers (ruiners), they have let us waste our time with.