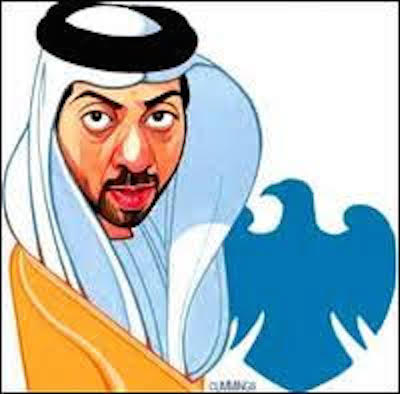 Reputational risk associated with autocratic investment in high profile soccer clubs threatened to catch up with the UAE as a powerful coalition of political and civic leaders in Manchester demanded that the Gulf country release political prisoners, investigate allegations of torture and respect human rights.

The leaders, who include members of parliament and Manchester’s city council, lawyers, and human rights activists, made their demands in a letter to UAE Deputy Prime Minister Sheikh Mansour bin Zayed Al-Nahyan, the owner of Manchester City FC.

Sheikh Mansour, a half-brother of UAE president Sheikh Khalifa bin Zayed al-Nahyan is the senior official responsible for the Abu Dhabi judiciary. UAE officials have insisted that the acquisition of Manchester City as well as Sheikh Mansour’s investment in a Major League Soccer team in the United States was a personal rather than a government investment.

Human Rights Watch warned as far back as 2013 that the UAE was using soccer to launder its image. Former English Football Association Chairman Lord Triesman called at the time for making a country’s human rights record one of the criteria for establishing whether a state entity or member of a ruling family passes the “fit and proper person test” for ownership of a Premier League club.

Nicholas McGeehan, Human Rights Watch’s senior Gulf researcher, describing the UAE as “a black hole” for basic human rights, has asserted that “a Premier League club (Manchester City) is being used as a branding vehicle to promote and effectively launder the reputation of a country perpetrating serial human rights abuses.”

The portrayal of acquisitions and sponsorships of prominent soccer clubs by autocrats as an effort to launder a country’s reputation casts a shadow over the use of soccer as part of the soft power strategy of the UAE as well as Qatar that expects to host the 2022 World Cup.

Gulf investors in soccer hope that soccer investments will allow them to embed themselves in the international community in ways that would ensure international public empathy in times of need and leverage diplomatic and commercial opportunities.

Sheikh Mansour’s acquisition in 2008 of Manchester City in which he has so far invested $1.3 billion has paved the way for a host of deals between the city and UAE companies, including a $1.3bn urban regeneration project.

The projects, some of which are managed by the Abu Dhabi United Group (ADUG), which is owned by Sheikh Mansour, have sparked protests by activists who assert that the deals allow developers to destroy monumental sites such as a 16th century pub in downtown Manchester and replace them with high-end residential complexes.

“The UAE has deep pockets but a worryingly poor human rights record. Many Mancunians will appreciate what Emirati money has done for Manchester, but they’ll also be extremely concerned about freedom of speech being suppressed and the host of unfair trials and torture cases that have occurred in the UAE. This is real opportunity for Manchester City Council and all other bodies in Manchester with commercial relations with the UAE to use their considerable influence with the Emirati authorities to raise human rights and show that they care about these issues,” said Amnesty International advocacy officer Kieran Aldred.

The leaders called in their letter, that was organized by Human Rights Watch and Amnesty International, for an investigation into allegations of torture and the release of Emirati human rights lawyer Mohamed al-Roken, who was sentenced to 10 years in jail in July 2013 following a huge crackdown on political and human rights activists in the UAE.

Mr. Al-Roken was one of 94 people sentenced in a court case that human rights activists denounced as unfair and a violation of due process. The defendants were denied legal assistance while being held incommunicado pre-trial, allegedly tortured, and refused the right of appeal.

“In addition to our concerns about the imprisonment of Mohamed al-Roken and others like him, we have concerns about the UAE’s ongoing abuse and exploitation of migrant workers, the existence of laws that appear to tolerate the physical abuse of women, and the authorities’ exclusion from the UAE of NGOs, journalists, and academics who have criticised the UAE’s record on human rights,” the letter said.

Despite significant moves by the UAE government to relieve the most onerous aspects of the Gulf’s kafala or sponsorship system for migrant labour, Al Khaleej newspaper reported earlier this month that mostly Indian workers in Abu Dhabi’s Mussafah camp had not been paid by their employer for more than 10 months and were struggling to survive. The workers ran the risk of being penalized because they had been unable to renew their visas.

The workers’ plight coincided with an agreement between the UAE and India to ensure that blue-collar Indian workers receive the wages and benefits promised to them before departure to the UAE and that they were not travelling on fake visas or job offers.

The UAE government last month ordered employers to arrange free accommodation for workers paid $540 or less per month. The decision applies however only to companies with more than 50 workers.

Glaringly absent among the signatories of the letter was Labour Party member of parliament and Manchester mayoral candidate Andy Burnham who had expressed concern when Sheikh Mansour initially acquired Manchester City. Several other Labour parliamentarians were also absent. It was not immediately clear why the Labourites had not joined the initiative.

The letter was published on this month’s anniversary of the 1819 Peterloo massacre in Manchester in which 18 people were killed and 700 wounded when the cavalry suppressed a pro-democracy and anti-poverty rally.

“Manchester has a rich tradition of standing up for political rights, women’s rights and the abolition of slavery. So the city’s close relationship with the UAE government, which has such a poor rights record, causes alarm for those who celebrate its historic past,” Mr. McGeehan said.