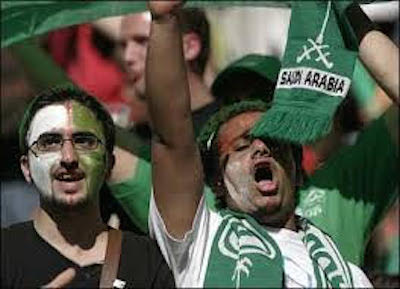 The effort to clean up the sports sector follows the rare admission earlier this year of a match-fixing scandal as well as a financial crisis that offered a glimpse of the daunting task and pitfalls involved in Prince Mohammed’s reform plan.

The kingdom’s Council of Economic and Development Affairs (CEDA) headed by Prince Mohammed earlier this month ordered sports authorities to create a fund that would provide loans to financially troubled clubs. The council said the fund would create 40,000 new jobs but offered no further detail.

Similarly, few details were provided about how the clubs, some of which are controlled by members of the ruling Al Saud family, would be privatized beyond a statement saying that the council of ministers chaired by King Salman had decided to turn them into commercial ventures.

Cleaning up soccer, the kingdom’s most popular sport, serves to achieve Prince Mohammed’s goals of greater international competitiveness as well as engagement of Saudis in exercise that were spelled out in his Vision 2030, a framework for economic and social reform announced last April.

Privatization of sports clubs, particularly those that have premier league soccer teams, is however where political risk and economic necessity meet in Prince Mohammed’s effort to introduce economic and social reform while ensuring that his ruling Al Saud family retains tight political control.

The clean-up of Saudi soccer constitutes a microcosm of how the government and the Al Sauds hope to root out corruption, introduce some degree of transparency, and cater to the aspirations of a young population without surrendering absolute political control.

The Saudi Arabian Football Federation (SAFF) sought to demonstrate the government’s sincerity by relegating in July Al Majma’ah-based premier league club Al Mujjazel to the second division for having fixed a match with rival Al Jeel Club. Match fixing had helped Al Mujjazel graduate from the 3rd to the 1st League in a mere two years.

The punishment of Al Mujjazel followed the relegation three years ago of two handball teams, Al Safa FC and Mudhar HC, the first ever in the kingdom’s sports history. The relegations constituted a clear message in a country in which members of the ruling family often interfered with referees and management when clubs were not performing to their liking.

The relegation also followed publication earlier this year of a schedule for clubs to pay off their debts and the imposition of a ban on the hiring of foreign players.

Sources close to the federation noted that the schedule listed for Al Nasser only $453,400 in debts to the soccer association even though the club’s total debt is asserted to be approximately $70 million. If correct, it would make Al Nasser Saud Arabia’s most indebted club after Al Ittihad FC, which owes $76 million. Al Ahli’s total debt was listed at $40 million, Al Hilal’s at $36.5 million and Al Shabab at $19.4 million.

“The game of football played by all sports clubs in Saudi Arabia is just like the competition between the business enterprises in which each football club tries to become the best team in the country and hence gain name, fame and superiority over other clubs, or rather say superiority over other princes who are behind the rival clubs,” wrote Sharaf Sabri in a book published more than a decade ago, The House of Saud in Commerce: A Study of Royal Entrepreneurship in Saudi Arabia.

Mr. Sabri put his finger on the problem the federation is likely to have in cleaning up the kingdom’s premier soccer league, a problem Prince Mohammed will encounter across the board with members of the ruling family having a finger in many pies and not wanting to see their perks compromised.

If that were not difficult enough, the government will also want to ensure that privatization does not weaken its control of sports in general and of soccer in particular given the pitch’s proven potential of serving as a rallying point for anti-government sentiment in a region governed by regimes that seek to tightly control all public space.

Saudi Arabia has long had a complex relationship with soccer because it evokes passions similar to those sparked by religion. Saudi clerics rolled out mobile mosques during the 2010 World Cup in South Africa to persuade fans gathered in cafes to watch matches to observe obligatory prayer times.

The government, in the development in recent years of the kingdom’s first national sports plan, initially considered emphasizing individual rather than team sports because of soccer’s political volatility, but was forced to drop the idea given the game’s enormous popularity.

The risks involved in a loss of control of soccer were evident in 2013 when a Facebook page entitled Nasrawi Revolution demanded the resignation of Prince Faisal, a burly nephew of the late King Abdullah who sports a moustache and chin hair, as head of Al Nasser. A You Tube video captured Prince Faisal seemingly being pelted and chanted against as he rushed off the soccer pitch after rudely shoving a security official aside.

The campaign against Prince Faisal followed the unprecedented resignation a year earlier of Prince Nawaf bin Feisal as head of the SAFF, the first Gulf royal to be persuaded by public pressure to step down. Prince Nawaf’s resignation led to the election of a commoner, storied former player Ahmed Eid Alharbi, who is widely viewed as a reformer and proponent of women’s soccer in a country in which women struggle to secure the right to physical exercise and education and participation in sports.

“The Saudis are extremely worried. Soccer clubs rather than the mosque are likely to be the centre of any revolution. Kids go more to stadiums than to mosques. They are not religious, they are not ruled by religious dogma,” said Washington-based Saudi dissident Ali al-Ahmad, who heads the Gulf Institute.

Mr. Al-Ahmad was referring to the power of clerics preaching Wahhabism, the puritan interpretation of Islam developed by 18th century preacher Mohammed ibn Abdul Al-Wahhab. Saudi Arabia’s ruling Al Saud family established the kingdom with the help of the Wahhabis who in return were granted the right to ensure that their views would dominate public life.

In a recent, unpublished survey by a Saudi scholar half of the young Saudi men interviewed said their priority was to have fun, go on a date, enjoy mixed gender parties, dress freely, and drive fast.

Recognizing the ambitions of Saudi youth, who account for much of the population, Prince Mohammed’s Vision 2030 acknowledged that ”we are well aware that the cultural and entertainment opportunities currently available do not reflect the rising aspirations of our citizens and residents, nor are they in harmony with our prosperous economy.”

Countering corruption and sanitizing soccer financially serves that purpose. It also could serve as a template for how Prince Mohammed introduces transparency and accountability in an economy in which members of the ruling family have long felt entitled and able to act with impunity.

Dr. James M. Dorsey is a senior fellow at the S. Rajaratnam School of International Studies, co-director of the University of Würzburg’s Institute for Fan Culture, and the author of The Turbulent World of Middle East Soccerblog, a recently published book with the same title, and also just published Comparative Political Transitions between Southeast Asia and the Middle East and North Africa, co-authored with Dr. Teresita Cruz-Del Rosario.