Three persons, including a retired Deputy Superintendent of Police, DSP, and a corporal, Abu Haruna, Solomon, respectively have been arrested for illegal trafficking of arms and ammunition.

The third suspect, Onuwa Attaka, is the driver of the arms laden vehicle. 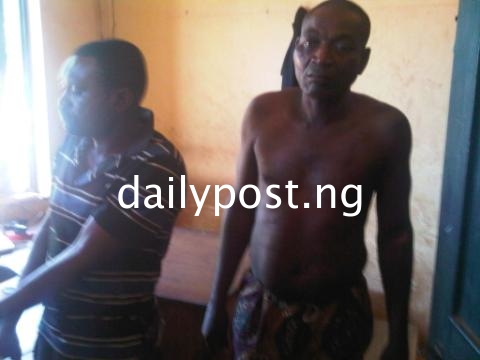 DailyPost gathered that their confession showed alleged involvement in supplying of arms to insurgents in the Northern Nigeria.

The three suspects, who were heading to the North from Imo State, were intercepted in Nsukka by officers and men of the Nigerian Army while traveling in a bus.

Items recovered from them include- 40 AK47 magazines, 4 boxes of AK47 live ammunition, 100 pieces of live cartridges, one piece of Denin Mopol khaki and charms concealed in a cap.

One of the army officers who spoke to DailyPost under anonymity disclosed that a police corporal serving in Imo State Police Command was also involved in the arms running.

He said, “When we asked the occupants of the vehicle to come down, we discovered a police corporal in uniform among them. The corporal on getting down pretended to be pressed; he later ran away”, he said.

It was gathered that the suspects were taken to Nsukka Police Division before their transfer to the state CID.

The retired DSP, Abu Haruna, confessed that he had been in the business of arms dealing since he retired from the police.

He said their mission was to supply the ammunition to their buyer in Taraba State.

Our source said Haruna further confessed that they decided to go on the supply after the buyer complained that the first batch was incomplete.

The Police corporal’s identity has been traced to Imo State Police command; his name was simply given as Solomon, even as efforts are still being made to effect his arrest.

Meanwhile, the Nsukka Police Area Commander, ASP. Ros-Amson Haladu has praised the gallantry of the soldiers in combating crimes in the area.

“I want to commend the Army Officers for their vigilance in tracking down these illegal arms dealers.

“At the same time, I warn criminals to leave this vicinity or risk being apprehended by security operatives”, he said.