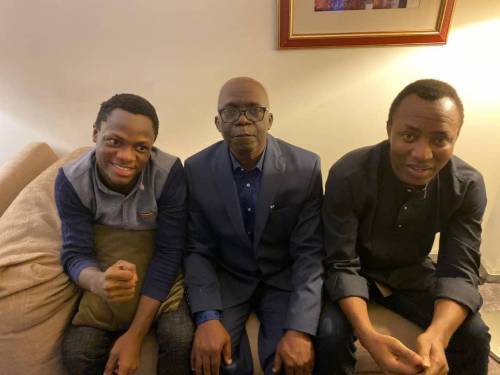 Pro-democracy activist, Omoyele Sowore, has been released from the detention of the Department of State Services (DSS) where he has been held for 125 days following his arrest on August 3.

The court had granted bail to Sowore on two different occassions but the DSS refused to let him out.

The DSS filed a seven-count-charge bordering on treasonable felony, cyberstalking among other offences.

It had earlier obtained an ex-parte order allowing it hold Sowore for 45 days while it investgated the charges eventually preferred against him.

He ordered that Sowore be released into the custody of his lawyer, Femi Falana.

Not comfortable with Sowore’s prolonged detention, his lawyer filed  a 19-ground-application asking the court to set aside the ex-parte order.

The case was assigned to Justice Nkweonye Maha of the same court.

Maha declined to hear Sowore’s motion on August 28, on the ground that she did not have jurisdiction to review the decision of Justice Taiwo who granted the ex-parte order.

She declined all applications made by Falana and sent the case back to the administrative judge.

Falana, again, filed another motion on September 13, asking the court to admit his client bail on self recognizance or upon any condition the court may reasonably deem appropriate.

Following the arraignment of Sowore and Bakare before Justice Ojukwu, the court granted him on bail but with stringent conditions.

Justice Ojukwu granted Sowore bail of N100 million with two sureties in like sum. The sureties must have landed property within the court’s jurisdiction and evidence of tax clearance. One of the surety must deposit N50 million in the account of the court as security. She also barred him from travelling out of Abuja during his trial.

The activists through their lawyer, Femi Falana applied for the variation of the terms and asked the court for leniency.

On October 21, the trial judge set aside the previous conditions of 50million security deposits by one of the suretie .

She also reduced the N50 million bail of the second defendant to N20 million. Justice Ojukwu, however, refused to vary all other bail conditions.

When the matter came up for trial on November 6, Ojukwu issued a release warrant ordering the release of the activists from DSS detention.

Again the secret police refused to let them go as they go.

In another statement the service said that Sowore may be knocked down by moving vehicle if released.

At the resumption of hearing,  on Thursday December 5  , the judge  lambasted the DSS for flaunting orders of the court court order.  The visibly angry Justice Ojukwu awarded N100,000 as damages against DSS for disobeying her order.

She also ordered the release of the activists from DSS custody within 24hours.

She has adjourned the case to December 6 for continuation of the trial.