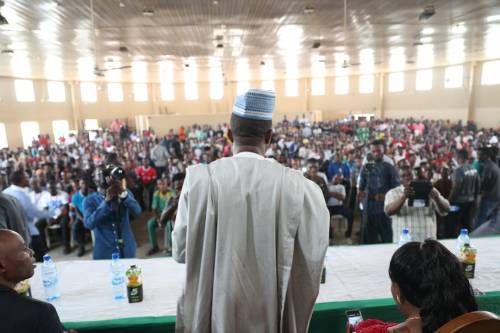 Omoyele Sowore, a leading presidential aspirant, says Senate President Bukola Saraki would refund, with interest, all the money he took to Kwara State, and end up in jail.
Sowore, speaking in Ilorin, the Kwara State capital, on Friday, also promised to end the politics of godfatherism when he becomes President in 2019.

Sowore, who made the pledge during a town hall meeting in Kwara, also noted that enough is enough of the “old corrupt political leaders” who have further deepened Nigeria into big economic woes.

He observed that Nigeria, as a black nation with a population of over 180 million people, cannot continue to be misgoverned and left in the hands of questionable leaders with shameful characters.
The presidential hopeful, who spoke when he was received by a mammoth crowd of enthusiastic youth at the Ilorin Circular Hotel, said the country would experience a “revolutionary change” in government by 2019.

He immediately declared that the revolution to liberate Nigeria has started in Kwara State, as the youth are now waking up to free themselves from the hands of godfathers.
Sowore noted that Kwara has been in a bondage of godfatherism for so long, adding that it is time to free the people from the chains of the Senate President, Bukola Saraki.

He observed that Saraki has turned himself into a demigod in Kwara but assured the people that the status quo would be changed by 2019.

“We will ensure that Kwara State is liberated from the hands of political godfather who can’t build good roads, schools and infrastructures,” he said.

“I remember last year, this was the same political Godfather that seized our money [meant for the SaharaReporters Civic Media Lab] and brought it to Kwara State.

“This same Saraki went to the court to stop us and sent thugs to beat us after bragging he has all the Judges in Kwara State in his pocket. Let me use this opportunity to tell him that the money he seized from us would be refunded soon and will be paid with interest while he goes to jail.”

Sowore added that the government of the All Progressives Congress (APC) has failed the nation hence should be kicked out.

He expressed his determination to rescue Nigeria from the current maladministration of President Muhammadu Buhari in 2019, saying: “By next year, we are taking back this country from the hands of the old guards and we would ensure we set its feet on the path of progress.

“Then, it will no longer be Sai Baba but sai Bobo because the country would not be left again in the hands of untrustworthy elders and leaders who has taken us aback.

“We won’t stop campaigning until we get there and win this election and move into the Aso rock by the year 2019 and present ourselves as leaders of today not tomorrow. We are tired of the old people in all the regions of the country mostly the ones who still think in analogue ways and have nothing to offer us.

“And the only way is to kick them out of power by getting our PVCs and say enough is enough to the old guards. As you can see, we don’t have time to waste, and the only time we have now is to join hands together in taking back our country. So, it is going to be a crime against our conscience if we refuse to vote in 2019 because we have made a decision to free ourselves and we must be totally free.”