Science Has Once Again Declared: ‘We Were Created’ 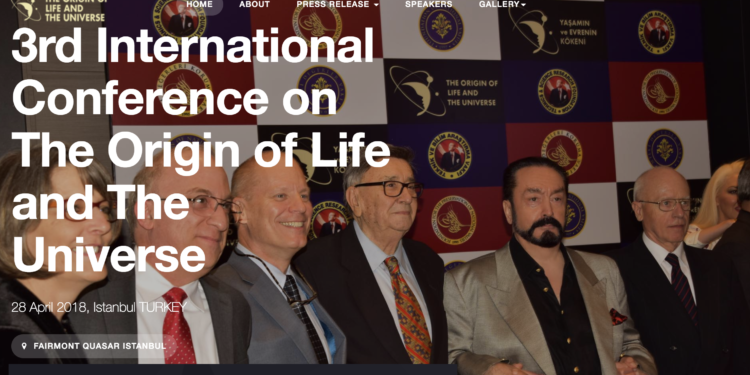 All those who are true friends of God, who are loyal to Him by heart and who rejoice by striving on His path, are the bright faces of this world. Regardless of their beliefs, religions and ethnicities, the friends of God are the force that keeps the world standing. If it were not for the existence of people who have a respectful fear of God, submit to His will and love Him more than anything, the world would be plunged into darkness. The earth would be left without love, friendship, mercy and compassion. The woe, pessimism and the oppression encouraging aspects of disbelief would lay waste to all mankind.

For these reasons, people who love God and who don’t want the world to face such darkness came together on April 28, 2018 at the Istanbul Fairmont Quasar Hotel for the Third International Conference on the Origin of Life and the Universe. Scientists and theologians from the USA, Italy, Austria and Germany contributed to a historical meeting. Co-hosted by The Technics and Science Research Foundation, The Foundation for the Preservation of National Values and The Foundation of National Values, the speakers once again announced to the whole world that science shows universe and life were created out of nothingness and proved that there was no further tolerance for Darwinist dictatorship. During the conference, which had two coffee and one lunch break, eight esteemed speakers offered breathtaking details about God’s beautiful creation of the universe and life. In between the sessions, Istanbul Dance Factory displayed an amazing dance performance, and famous percussionist Onur Seçki stunned the attendants with his spectacular show. The Third  International Conference on the Origin of Life and the Universe was a success not only with the topics it dealt with or in its impeccable organization, but also with an elite lineup of speakers and its modern and sophisticated attendants. The flawless organization, which saw close to 500 guests, was praised by guests from the scientific, political and artistic communities.

Esteemed scientists who spoke during the conference touched on many crucial points. While Dr. Bijan Nemati explained why Earth has a very special and privileged place in the universe, Professor Ken Keathley mentioned the seven days of creation as explained in the Bible and explained why the new ‘Young Earth’ movement is wrong. Dr. Fazale Rana showed how the human genome is a very intricate, elaborate creation, while Ms. Anna Manja Larcher demonstrated that love and compassion cannot be accounted for by evolutionary ideas. Professor David Snoke showed that those who use the phrase ‘Intelligent Design’ to avoid using the name ‘creation’ were conflicted and sociologist Fabrizio Fratus made it clear that evolution was not science but a mere ideology. Dr. Oktar Babuna explained that the Qur’an pointed to creation and not evolution and Professor Hans Koechler analyzed monotheism and the meaning of co-existence.

Needless to say, there is a crucial reason why such an elite and large international gathering was organized.

The world today is faced with an unprecedented bloodshed. People live in fear and apprehension. While many countries have remained untouched by war,  they too are wrestling against the plague of terrorism. The world has been effectively deprived of happiness, joy, cheerfulness and tranquility. People lead tense, stressful and anxious lives.

But they do not know what to do or how to put an end to the current state of affairs. They feel helpless against the power that incites wars, that somehow orchestrates and propagates evil. They are waiting for a helping hand to reach them.

At this point, we, the friends of God, are obliged to step into action and fulfill our responsibility. We have to be a strong wind that will sweep through the dark clouds spawned by disbelief looming over the world and usher in the bright, luminous, warm and peaceful days.

For that reason, the people who hold this heart, came together for the Third International Conference on the Origin of Life and the Universe and foiled the sinister plot of the materialist dictatorship around the world. This was a crucial response to those who sought violence, discord and division; it was shown that Darwinism was the source of the evil.

However, this is not the only reason why the conference was a great achievement.

The Third International Conference on the Origin of Life and the Universe brought together  Mormons, Muslims, Catholics, Evangelists Presbyterians, and welcomed diverse nationalities and religions under a single roof. A common language was used to declare Almighty God as the Creator of all universes from nothing. The beauty in unity, friendship and solidarity was shown to the whole world.

There is no doubt that no matter how great the plot of the evil, the alliance of the good, the right will always be triumphant. It is impossible to live with hatred while love and sincerity are very easy to achieve. It is for this reason crucial to show these facts to the world through such events. Love is the most amazing value in the world and it should be shown that love can be honestly and sincerely experienced without any ill-intentions or ulterior motives. This event was one of those rare incidents where this love and spirit of solidarity were displayed.

The International Conference on Origin of Life and the Universe, which has been an annual event for the past three years, once again proved to be a spectacular event to usher in love and solidarity to the world. This beautiful effort will continue and gather strength every year.

The world, now a scene of constant aggression, anger, fear and death, urgently needs love, solidarity and a beautiful future. Societies who were made to believe that everything is a product of coincidences, should be saved from this deception. People who fell into a the cycle of desperation due to the deception of coincidental formation, will now discover the beauty of seeing God’s existence and relying on Him. Showing this fact to the world using science and with the warmth and modernism of religion will help open up a whole new leaf of beauty for our world.

Sowore: Saraki Will Refund Our Money With ...

Evolution theory could not be proven – ...